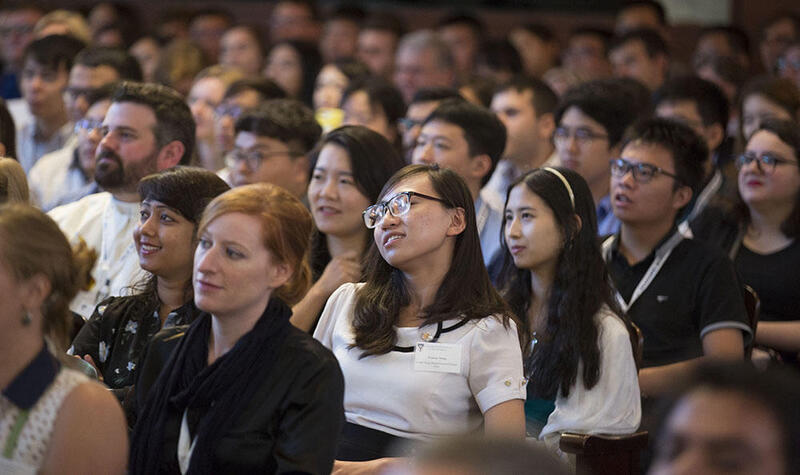 Students in the Graduate School of Arts & Sciences were welcomed to campus on Aug. 24 during a matriculation ceremony and other events.

President Peter Salovey and Lynn Cooley, dean of the Graduate School of Arts & Sciences, addressed the new students at a matriculation ceremony in Sprague Memorial Hall. Salovey congratulated the 650 students who received admission from a pool of about 10,000 applicants. He described his own experience as a graduate student and described how he fell in love with New Haven and its restaurants. Noting that he met his wife Marta Moret while participating in student government, he encouraged the graduate students to become involved in that same extracurricular activity.

In her address, Cooley emphasized the  collaborative nature of graduate studies at Yale, and urged the students to approach a different lab to learn a new technique, or consult with an expert in a different field to get a perspective on their research, or to engage with fellow students by taking part in the more than 50 extracurricular groups for graduate students. She also touched on the importance of free expression and of learning to accept, and even embrace, opposing viewpoints. She encouraged the students to use their Yale education to contribute to discussions on topics of societal or global impact.

The members of this year's entering class of graduate students earned their undergraduate degrees at 286 different colleges and universities and hail from 48 countries around the world. In addition to 334 students from the United States, 157 students come from China, 33 from India, 17 from Canada, 11 from South Korea, and 11 from the United Kingdom. Most of the students (480) are enrolled in doctoral programs; the remaining 170 are pursuing their master's degrees.

The students attended an outdoor reception on Cross Campus and also took part in orientation sessions.