One Graduate’s Story – Preparing for a Unique Career Path 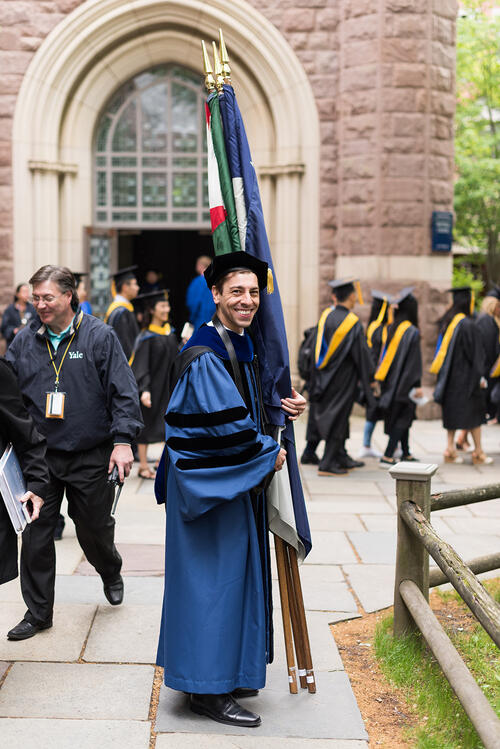 Matthew Tanico (PhD 2017, Spanish and Renaissance Studies) has embarked on the first-step of his career as a Visiting Assistant Professor at New York University. He joined the Spanish and Portuguese department in early September, but also continues to work at Yale a few days a week as a Project Specialist in the Faculty of Arts and Sciences Dean’s Office. “It’s possible to do both,” Tanico said. “If you’re on the job market, you can apply for academic jobs and non-academic jobs. And you can use your time at Yale to train for both.”

When Tanico arrived at Yale’s Graduate School of Arts and Sciences, fresh from completing his undergraduate degree in Spanish and Italian at NYU, he fully expected to enter academia at the end of his six years at Yale. He soon realized that this was going to be a tougher journey than he had anticipated. While he focused on his studies and research, he also took advantage of the many resources offered at Yale to expand his work experience and leadership skills and to investigate additional career opportunities.

Tanico served on the Graduate Student Assembly for two years and was a graduate affiliate at Pierson College, which enabled him to gain experience and an insight into the undergraduate experience and community at Yale. It afforded him the opportunity to mentor and be a role model outside of the classroom – important skills for any future role. He also took a paid internship with Yale University Press for a year. (Graduate students are allowed to undertake paid work for up to 10 hours per week outside of their research study.)

The services offered by the Office of Career Strategy enabled Tanico to explore additional career options. He went to see them in his fifth year to figure out what he really was interested in and to determine how he could acquire the skills necessary for either an academic or non-academic career.

“I knew that an academic career was going to be a difficult path due to a lack of available positions on the job market; however, the skills developed during a Ph.D.—including research, critical thinking, problem solving, leadership, being a team player and effective communicator—are highly desirable in a variety of professions. The OCS team was there to suggest many other options and to discuss ways to acquire the experience necessary to pursue those options,” Tanico said. “Meredith Mira, at the Office of Career Strategy, had me do these exercises where you find the job you think you want, you figure out what skills and experiences you’ll need, and you use your time at Yale to figure out how to get those skills… Yale offers you all of these possibilities.”

Another opportunity to gain valuable skills and experience presented itself when Tanico attended the 2016 Where do I go from Yale? event, hosted by the Graduate School Alumni Association (GSAA). There he met Deputy Provost Emily Bakemeier and set in motion a series of conversations that led to a Professional Development Opportunity in academic administration. In that role, he worked alongside the Graduate School staff and learned the inner workings of how a premier academic institution is managed on a daily basis. “The Professional Development Opportunities offered by the Graduate School are an ideal way to tailor Yale’s funding to your own career goals.”

Tanico offers this advice to those following in his footsteps, including the new 2017 cohort who are embarking on their own scholarly journey. “First, determine what you want to do; then, take advantage of the resources that Yale offers that reach way beyond the classroom. Take the opportunity to expand your skillset and broaden your horizons, which will make you a stronger candidate on both the academic job and non-academic job markets.”

In some ways, Tanico has the best of both worlds now. As a professor, he has the opportunity to teach exactly what interests him most—Don Quixote and the literature of the Spanish Renaissance. As a Project Specialist in the FAS Dean’s Office, he has the opportunity to continue building valuable skills and contributing to the Yale community. Currently, he is designing a website for new faculty about living in New Haven and building a series of visual “road maps” to the various undergraduate majors, detailing pre-requisites and course requirements, for display in the residential colleges.

“For PhD students in the humanities, it’s important to get rid of your expectations about what kind of job you’ll end up with once you finish,” Tanico said. “Academic administration, teaching, whatever. You may or may not like the job, but that’s part of the process, and part of figuring out what you ultimately want to do.”