From Personal Tragedy to Renewal, with Help from Dante

Joseph Luzzi (PhD 2000, Italian), professor of Comparative Literature at Bard College, is author of In a Dark Wood: What Dante Taught Me About Grief, Healing, and the Mysteries of Love (HarperCollins 2015). The book is a reflection on how Dante’s epic poem, The Divine Comedy, provided him with the strength to cope with and overcome an unbearable tragedy.

On a cold November morning in 2007 when Luzzi was 40 years old, his pregnant wife Katherine had a fatal car accident. Forty-five minutes before she died, their first child, Isabel, was born by Cesarean section.

“I suddenly found myself in what Dante Alighieri called the selva oscura — the dark wood — that moment of crisis that divides your life in two. Dante’s words became a mantra to me: ‘You will leave behind everything you love / most dearly, and this is the arrow / the bow of exile first lets fly.’ Katherine's death would exile me from my own life, robbing me of the future we had planned, and even worse, robbing Katherine of the motherhood she had dreamed of.”

Luzzi had studied and taught The Divine Comedy, a fourteen-thousand-line epic on the state of the soul after death. He had always looked to it “for help with life’s most demanding questions,” and there had never been any “more challenging than the ones I was now facing. … In my grief I identified more closely with Dante than ever before, especially his story of exile, the feeling of being a pilgrim suddenly adrift in a dark wood.”

“The Divine Comedy didn’t rescue me after Katherine’s death,” Luzzi writes in the prologue. “That fell to the support of family and friends, to my passion for teaching and writing, and above all to the gift of my daughter. Our daughter. But I would barely have made my way without Dante.” 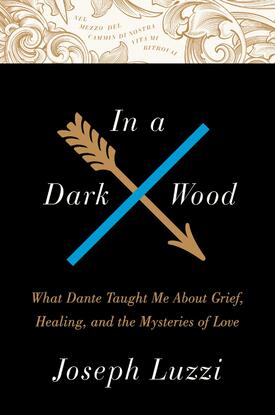 In a Dark Wood follows the structure of The Divine Comedy, recounting the Inferno of his grief, the Purgatory of healing and learning to raise Isabel on his own, and then the Paradise of discovering, after four years of pain, that he could find happiness and love again when he met Helena Baillie, an English musician who would become his wife and a mother to Isabel.

“Katherine’s death would bring with it boundless chaos and flux, but there was one constant throughout the entire aftermath. My reading of Dante had always been deep and personal, but when I found myself in the dark wood, his words became a matter of life and death. … I now understood that every grief story is indeed a love story — it was love that had landed me in the dark wood to begin with, and only love could lead me out. As Beatrice had taught Dante, you can’t have love without faith and hope and joy. Helena’s love rescued us.”

Luzzi is a frequent contributor of essays and reviews to the New York Times, Los Angeles Times, Bookforum, the London Times Literary Supplement, and many others. His first book, Romantic Europe and the Ghost of Italy (Yale University Press 2008), received the Scaglione Prize for Italian Studies from the Modern Language Association. His recent books include A Cinema of Poetry: Aesthetics of the Italian Art Film (Johns Hopkins University Press, 2014) and My Two Italies (Farrar, Straus and Giroux, 2014).

Luzzi's dissertation, directed by Professor Giuseppe Mazzotta, explored Dante's influence on the transition from the Enlightenment memoir to Romantic autobiography in eighteenth- and nineteenth-century European literature. He joined the Bard faculty in 2002, after spending a year as a visiting professor at the University of Pennsylvania.