Since coming to Yale, Minges has published 19 papers in peer-reviewed journals and was first author on 14 of them. Another four articles are currently undergoing review. Based on his contributions to the field of behavioral medicine as an early-stage investigator, he was recently awarded the Society of Behavioral Medicine’s 2016 Distinguished Student Travel Scholarship.

Minges’s dissertation, “Clinical, Behavioral, and Socio-demographic Correlates of Overweight and Obesity in Adolescents with Type 1 Diabetes,” advised by Margaret Grey and Robin Whittemore, identifies risk factors and considers obesity prevention initiatives for adolescents with diabetes. But that’s only one area of interest for him. 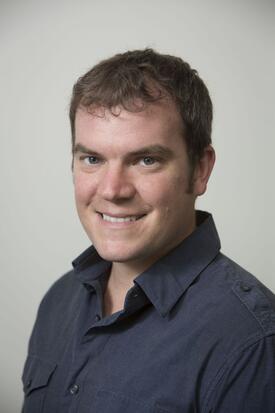 His paper in the Journal of School Nursing [http://www.ncbi.nlm.nih.gov/pubmed/25312400] examines the extent to which adolescents meet established guidelines for healthy behavior. What he found was astonishing and deeply distressing: essentially none of the teenagers in the studies he analyzed met the guidelines for physical activity, sedentary behavior, diet, and sleep. They all spent too much time in front of screens and too little time moving around.

This finding propelled him to explore the issue further and look for ways to promote healthier behavior. Using an innovative qualitative metasynthesis technique, he identified the barriers and facilitators to reducing the time kids spent on screens. These findings were published in a special qualitative-methods issue of the journal Health Psychology. [http://www.ncbi.nlm.nih.gov/pubmed/25822054]

Next, Minges did a systematic review of the impact of early school starting times on adolescent sleep. His analysis of experimental studies, published in Sleep Medicine Reviews [http://www.ncbi.nlm.nih.gov/pubmed/26545246], reported that when schools started 25 to 60 minutes later, teenagers slept from 25 to 77 minutes more every weeknight — a potential long-term solution to chronic sleep deprivation during adolescence. Later start times also reduced students’ daytime sleepiness, depression, caffeine use, tardiness to class, and trouble staying awake.

In another paper, Minges analyzed eight international studies on the impact of giving students, ages 5 to 18, standing desks rather than traditional ones.

“Children spend over 50 percent of the school day sitting — traveling to school, during class, at lunch, sometimes during recess, and traveling home after school,” Minges said. It might be impossible to cut sitting time at lunch or on the school bus, “but changing the classroom environment to be more conducive to standing seems like low-hanging fruit.”

The paper, published in the journal Pediatrics [http://www.ncbi.nlm.nih.gov/pubmed/26801914], argues that standing desks could help prevent and manage obesity. While the eight study designs varied greatly, half showed that students with standing desks sat about an hour a day less than those with regular desks, and two of the studies showed a significant increase — up to nearly 31 percent — in the time children stood. Those who used standing desks logged more than one hour a day less of television and computer use, reported far more time “walking around,” and moved much more frequently than children who had traditional desks.

In addition to technical journals, his work has been featured in popular media, including US News & World Report [http://health.usnews.com/health-news/articles/2016-01-22/standing-desks-in-classrooms-may-kickstart-kids-activity], and Fox News [http://www.foxnews.com/health/2016/01/22/classroom-standing-desks-may-curb-kids-sedentary-time.html].

Minges was born in Pittsburgh and moved to Madison, Connecticut in middle school. He earned his undergraduate degree in social work from Marist College and his MPH from Columbia University. He conducted research in Melbourne, Australia as a Fulbright Scholar.

He decided to pursue a PhD at Yale in order to obtain the research and scholastic skills required to pursue a career in academia and clinical research. “Yale School of Nursing was a top choice given the program’s clinical lens on research methods and theory, as well as the School’s diverse areas of faculty expertise,” he says.

When not doing research, he likes to travel, kayak, and hike with his growing family, including a Siberian Husky and Great Dane/Mastiff mix.