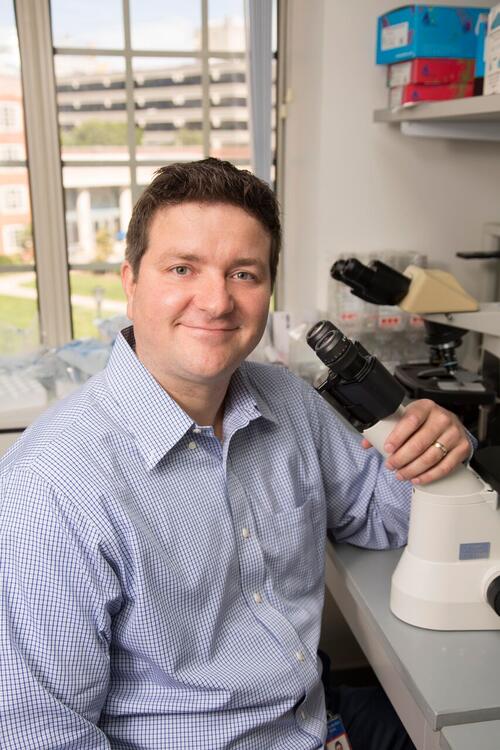 Andrew Branagan, MD (Investigative Medicine), has won a $100,000 Clinical Scholar Award from the American Society of Hematology, the world's largest professional organization for clinicians and scientists who work on blood diseases. The award will support his current research: clinical trials using a novel influenza vaccination strategy for patients with plasma cell disorders.

Normally, plasma cells in the blood produce many different antibodies to fight a wide range of infectious microorganisms. In the case of plasma cell disorders, malignant plasma cells multiply uncontrollably and secrete abnormal antibodies, leading to the suppression of normal antibodies and disruption of the immune system. People with plasma cell disorders are highly susceptible to infections and more than six times as likely to become infected with the flu as other people. Branagan is studying the effectiveness of a two-dose series of high-dose influenza vaccine. Results from a pilot clinical trial suggest that this strategy is safe, leads to very high rates of protective antibodies, and is associated with fewer than expected flu infections. If these results are confirmed in larger studies, his approach may alter standard medical practice.

“I developed a passion for studying plasma cell disorders at Dana-Farber Cancer Institute prior to medical school. I especially enjoyed combining research efforts with international colleagues for the common goal of scientific advances,” he says.

Investigative Medicine is Yale’s innovative PhD program to prepare physicians for careers in scientific research. Branagan earned his MD from the Medical School for International Health, which is a collaboration between Ben-Gurion University in Israel and Columbia University in New York. It is the only medical school that incorporates intensive cross-cultural education and international health training into all four years of curriculum, culminating with an independent international clerkship. “Some of the highlights from my medical school experience include working with Physicians for Human Rights in Gaza/West Bank and spending an extended clerkship in Northern Vietnam learning about the local culture and studying alternative medicine practices.”

After medical school and a residency in Internal Medicine at Dartmouth, he came to Yale for a fellowship in Hematology and Medical Oncology.

“I have been fortunate to have an outstanding research team, including lab colleagues, clinicians, clinical trial research coordinators, and PhD thesis advisers,” he says. “In particular, I am thankful to all of the patients who participated, to my primary mentor Dr. Madhav Dhodapkar, and the dedicated efforts of Eamon Duffy (a current Yale medical student), without whom the award would not have been possible.”

In addition to science, Branagan loves spending time outdoors, hiking, boating, and fishing. His first job after college was surveying wild trout throughout the mountains of the Eastern Sierra for the California Department of Fish and Game. He also enjoys cooking, traveling, collecting bourbon, and spending time with his wife Sonia Joy, who is a child psychiatrist and an assistant clinical professor at the Yale Child Study Center and School of Medicine. They (and their Alaskan Shepherd, Gus) are eagerly awaiting the birth of their first child in February.