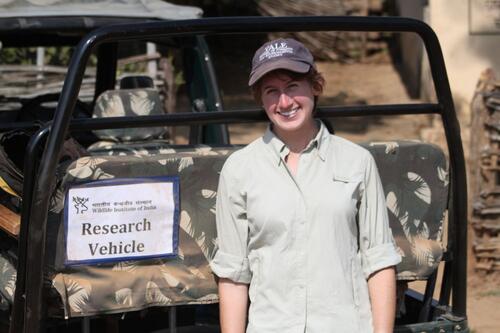 “There are fewer tigers in the wild than there are Yale undergraduates,” says Jennie Miller (FES PhD ’15), an ecologist and conservation scientist. Miller studied tigers and leopards in India for her dissertation and now, as a postdoctoral researcher, works for Panthera on their lion and leopard programs in Africa. Panthera is a global conservation organization, with a particular focus on the seven largest species of wild cats – cheetahs, jaguars, leopards, lions, pumas, snow leopards, and tigers.

Miller’s research focuses on how these cats interact with people. Unfortunately, some interactions involve attacks on livestock (and sometimes humans), leading to the retaliatory killing of the predators. Her work aims to change that, and to help preserve the fewer than 3,200 wild tigers that still roam freely in Asia, but are on the brink of extinction.

In November, she was awarded the third annual F. Herbert Bormann Prize honoring an F&ES doctoral student whose research best exemplifies the legacy of the longtime Yale professor, whose work had a profound impact on the environmental movement. Miller was recognized for her work on an emerging strategy known as “spatial predation risk modeling,” which uses data from past attacks to predict and map likely hotspots of future livestock depredation. Her paper, “Mapping attack hotspots to mitigate human-carnivore conflict,” was published in the journal Biodiversity and Conservation in August.

Born and brought up in the San Francisco Bay Area, Miller developed an early interest in wildlife and volunteered as a nature counselor when she was in middle school. At Claremont McKenna College, she was unsure whether to major in psychology, English, or biology. A trip to India with her father, Richard Miller, to meet his yoga guru, T.K.V. Desikachar (one of India’s leading spiritual teachers), made clear the path she would take.

While on safari through Corbett Tiger Reserve, she heard stories about tigers and leopards attacking people and their livestock. “Indians display an impressive tolerance for dangerous wildlife in their backyards,” she says. Many villagers allow their cows, goats, and buffalo to graze freely during the day and pen them up only at night. When the farms are close to forests where predators live, attacks are inevitable. Miller saw tigers wandering freely and felt “an incredible, visceral reaction. I knew I wanted to commit my career to this fascinating interface between carnivores and humans.”

When she returned to college, she signed up to major in Organismal Biology with the dream of studying large carnivores like tigers. One of her professors cautioned her that carnivore research was a highly competitive field to get into, so she focused her attention on studying the conservation of plants, birds, and frogs. After college, she returned to India on a Fulbright Scholarship to study three species of pheasants and gain more experience, make connections, and learn to handle the bureaucracy of doing fieldwork in India. While there, she met her fiancé, Sahas Barve, who is also a wildlife biologist. They plan to get married in July.

When it came time to choose a graduate school, Miller saw Yale as her opportunity to study tigers. “Yale was ideal for studying wildlife in India,” she says. “The Graduate School gives PhD students a stipend and funds their tuition, so I could pursue my own research interests rather than an adviser’s agenda. Yale also has a vibrant South Asian community. The language programs are strong, and I studied Hindi for two years before working in a rural area of India where most people don’t speak English. The South Asian Studies Council funded several of my trips to India before I could acquire external grants.” In 2010, Miller was awarded a Critical Language Scholarship from the U.S. Department of State to spend the summer learning Hindi at the American Institute of Indian Studies in Jaipur, Rajasthan. She now speaks enough Hindi to conduct her research “and sympathize with the villagers who lose livestock to tigers.”

Miller asked Oswald Schmitz to serve as her dissertation adviser. “Os is an eminent thinker in predator-prey research,” she says. “He was one of the first scientists to show that predators can shape how prey behave simply by scaring them.” His own work involves spiders and grasshoppers in Connecticut, but he helped Miller “scale up the same ecological drivers to larger species like tigers and cows.” 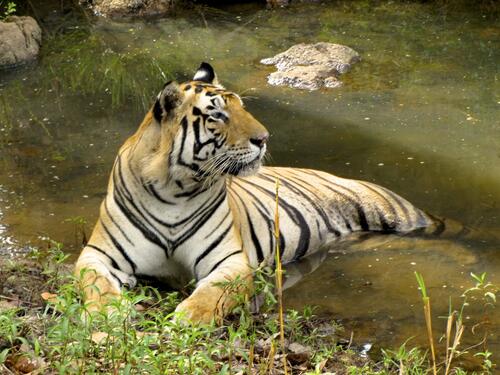 Miller became a research affiliate at the Wildlife Institute of India and studied tiger and leopard attacks on livestock in Kanha Tiger Reserve. She created spatial models to understand where predators were most likely to attack their prey, and found that high-risk hotspots were concentrated in dense forest patches along the boundary of the park core zone, a restricted area where livestock grazing is illegal yet nonetheless continues. The models generated “risk maps” that predicted where future attacks might occur, and the maps are being used by the Forest Department and villagers to manage their grazing livestock more safely.

For her work with Panthera, Miller currently commutes between Cornell University in Ithaca, NY, and the University of Cape Town in South Africa. She studies ways to conserve the big cats from excessive trophy hunting, poaching, and retaliatory killing.