Reconstructing the Glacial History of a Mountain Range in Southern Chile

“We live in a warm, interglacial world, where we see deep U-shaped valleys, but not the large glaciers that cut them,” says Elizabeth Brown (Geology & Geophysics). “We tend to think that these landscapes were carved by alpine glaciers that formed as the global temperature cooled over the last several million years. In the Central Patagonian Andes, however, there is evidence of alpine glaciers dating back to at least six million years, when the prevailing global climate was relatively warm. 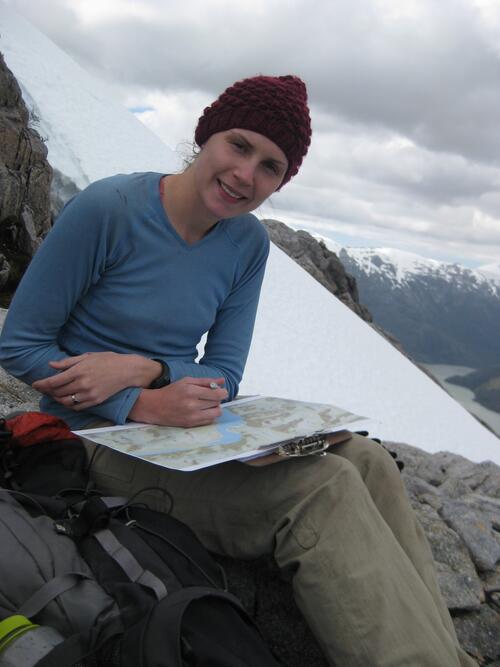 “As of yet, we don’t know what role these early glaciations played in altering the landscape. Reconstructing the glacial history of mountain ranges is critical to our understanding of how mountains grow and are eroded, and what controls their height and shape. If glaciation is coupled to global cooling, the majority of the erosion should have occurred in the last few million years, but if glaciation eroded the valleys over a longer time period, that would mean that topography has a greater influence over glacial erosion than climate.”

Liz and two Yale undergraduates have set out to determine whether the glacial valleys in Patagonia were carved relatively quickly and recently — over the colder conditions of the last two million years — or more slowly and farther back in time, beginning with glaciations that occurred six million years ago, when the climate was warm.

Liz, Wendy DeWolf, and Ryan Laemel spent three weeks in southern Chile on the eastern side of the Andes over winter break, gathering samples they would later test using a radiometric dating technique. Liz’s research will yield a dissertation. Wendy and Ryan will write senior essays based on their findings. Ryan proved to be especially useful to the expedition, Liz says, “because he learned how to drive a manual shift car in the week before we left for Chile and then did all of the driving while we were there, including eleven hours straight on the Careterra Austral, a 400-km narrow dirt road through the Andes.”

On a typical day, the team hiked as far up a mountain as they could, generally about 1000 meters. On the way down, they stopped every 150 meters to collect samples, arriving at the bottom with about 40 pounds of rock per backpack.

“The hiking in this area is incredibly difficult because there is so much vegetation,” Liz says. “For the first 400 m of elevation, we were literally pulling ourselves up by tree roots and branches. We had generally good weather for the first two weeks of  our trip, but we had to change our plans when it rained for three days straight and snowed in the mountains, making hiking impossible.” This is one of the wettest spots on earth, getting over a dozen feet of rain a year.

In all, they collected 32 five-pound samples which they are currently crushing into particles the size of sand. At Yale, the particles will be separated by their density to extract the mineral apatite. Individual apatite crystals will be analyzed at the Berkeley Geochronology Center for their thermochronologic ages to determine the cooling history of the rocks as they were brought to the surface by glacial erosion.

Liz explains: “(U-Th)/He thermochronology is based on the nuclear decay of uranium (U) and thorium (Th) and the accumulation of the helium (He) isotope produced by this decay. The retention of He in the host mineral is thermally controlled; it is lost by diffusion at high temperatures, but becomes progressively retained as the mineral cools.”

While doing fieldwork, they stayed on a boat they had chartered, and their guides cooked all of their meals on a wood stove in the middle of the boat. “It was awesome! Lots of tortillas (Chilean flat bread) and eggs. We introduced them to peanut butter, which we brought from the U.S., because it is really uncommon in South America.”

Liz earned her BA from Occidental College. “In high school my favorite subjects were math, physics, and history. As a freshman in college, I majored in geology because it is math and physics problems applied to the natural world. I was drawn to the field of geomorphology because we can use the presence (or absence) of landforms such as fault scarps, glacial moraines, and river terraces to determine how a landscape has evolved over time, which requires a bit of geologic history storytelling. Plus, you get to go on great field trips!”

When in New Haven, Liz loves to cook, reading cookbooks for new recipes and hosting dinner parties with her husband, Peter Christeleit, who does market research for GE Power & Water. She recently started running, and now plans to run a race every season of the year.