Researching the Historical Context of Islamic ‘Proofs of Prophecy’

Mareike Koertner (Near Eastern Languages & Civilizations) studies thematic compilations of hadith: the recorded sayings and deeds of Muhammad (c. 570-632). She focuses on ‘proofs of prophecy’ — texts that offer evidence of the truth of Muhammad’s prophetic mission. 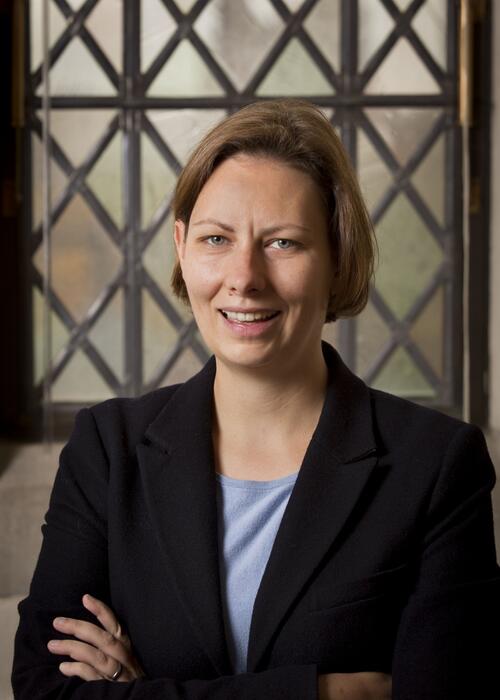 The first compilations of this kind were assembled in the ninth century CE (corresponding to the third century in the Muslim calendar), a period when inter-religious debates, particularly regarding the veracity and legitimacy of Muhammad’s prophecy, took place.

The ‘proofs of prophecy’ that Mareike studies are “typically lists of hadith, one after the other. Hadith are authenticated by the chain of transmission, beginning with the person who heard it from the Prophet down to the one who recorded it. In the works I study, they are listed without commentary or explanation of why they were chosen; they are usually not placed in any apparent thematic order and differ considerably with regard to their selection of accounts.” In some, learned Jews or Christians recognized Muhammad prior to his call to prophecy; in others, pagan sacrificial animals or jinn anticipate his coming; still other hadith deal with the miracles he performed.

In one story, for example, a Muslim community runs out of water, which is necessary for the ritual ablution before prayer. “The Prophet asks for a small water bowl and performs the ablution himself, and then invites the other men to perform their ablution from the same bowl, which suffices for everyone present – 70 to 1400 men are mentioned” in different versions, Mareike says.

“The hadith-based compilations have so far been overlooked or considered as hagiography or folklore,” she says. Many of the Dalā’il al-Nubūwa works “are no longer extant, but there are records of their existence in biographical or bibliographical literature. After identifying these works, I situated their authors among the hadith scholars of their time and undertook a network analysis of this group. I studied what impacted the individual scholars’ selection process and found that debates with Jews and Christians, methodological developments and theological notions within Muslim scholarship, as well as religio-political events within the Muslim empire influenced authors in their choice of ‘proofs of prophecy.’ ” This part of her dissertation was awarded the Theron Rockwell Field Prize at last May’s Commencement Convocation.

“I grew disenchanted with modern Middle Eastern politics and became increasingly upset by the fact that the continued state of crisis in the Middle East overshadows its rich cultural heritage in Western perception. This inspired me to study Classical Arabic and Islamic history and culture and, eventually, to pursue a PhD and teach Islam and its civilization.”

Mareike was born in Germany, but moved with her family to the U.S. and later to Egypt.

“We moved to Egypt in the immediate aftermath of 9/11, and the society we lived in did not correspond to its portrayal in Western media. I always felt welcome, and Egyptians, for the most part, met me with hospitality, respect, and genuine curiosity rather than prejudice. We lived there during the launch of the invasions of both Afghanistan and Iraq but did not experience any hostility related to these events.” She spent a year at the American University in Cairo studying Arabic and Islam, intending to major in political science with a focus on the Middle East.

She gradually grew “disenchanted with modern Middle Eastern politics and became increasingly bothered by the fact that the continued state of crisis in the Middle East overshadows its rich cultural heritage in Western perception.” This discontent motivated her to study classical Arabic and Islamic history and culture and pursue a PhD in order to teach others about Islam and its civilization.

In addition to her year at the university in Egypt, Mareike has studied with traditional teachers in Yemen and Syria. In Yemen, she had one-on-one instruction in classical Arabic, literature, Qur’anic recitation, and hadith. The neighborhood experienced daily power outages, and she often did homework by candlelight. “In Damascus, I rented a room from a family in the Old City, not too far from the Suq and the Umayyad mosque, took part in a women’s class for Qur’an recitation at a local madrassa, and had a private tutor for hadith and literature. I also participated in a traditional hadith class in New York, which covered memorization, interpretation, and methodologies.”

Mareike has been active in communicating her expertise at national meetings in the U.S. and abroad. At Yale, she helped organize the conference, “Conceptualizing Literary History: Foundations of Arabic Literature,” and coordinated the Yale Arabic Colloquium for two years. She is also an avid rower.