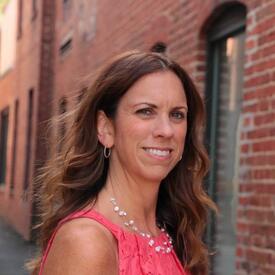 Colleen J. Shogan (PhD 2002, Political Science), deputy director of the Congressional Research Service (CRS) and adjunct professor of government at Georgetown University, has murdered a senator. To be more precise, a fictional character she created has killed a fictional senator in her first novel, Stabbing in the Senate (Camel Press 2015).

The novel centers around policy analyst Kit Marshall, who comes to work early one morning to find her boss, Senator Langsford, impaled on a stainless steel replica of an Army helicopter. Panicked, she pulls the weapon out of his chest and instantly becomes the prime suspect in his murder. To clear her name, she and her best friend Meg set out to solve the case and in the process, take the reader behind the scenes at the U.S. Congress. There are lots of suspects, including some delightfully unsavory characters, and everyone seems to have an alibi.

The book is set in and around the Senate Office Building, where Shogan worked as a fellow and then as legislative staff for Senator Joseph Lieberman of Connecticut during the 112th Congress before she joined the staff of CRS, a service unit within the Library of Congress.

Stabbing in the Senate is “Book One” of the Washington Whodunit Series. Shogan has a three-book contract with her publisher and has already written the second volume. Titled Homicide in the House, it will be released in October 2016 — right before the election.  It features some of the same characters, who will once again be called upon to solve a murder. Shogan is working on the plot of the third book right now, and its tentative title is Calamity at the Cosmos Club. Her novels are in the tradition of Margaret Truman, daughter of President Harry Truman, who authored a series of murder mysteries set in the nation’s capital.

Shogan has been a mystery fan since she was six. Back then she read Nancy Drew, the Hardy Boys, Encyclopedia Brown, and Trixie Belden.

Even as a graduate student, Shogan read fiction at night to unwind. “I thought it was a good way to escape mentally from thinking about my dissertation,” she says. 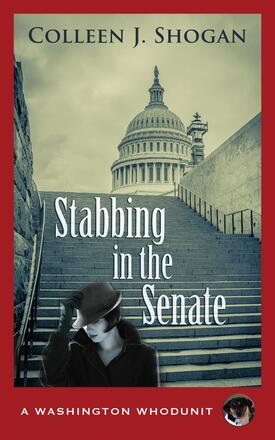 Shogan came up with the plot for Stabbing in the Senate while taking a walk in her Arlington, Virginia neighborhood — an area not known for violent crime, but densely populated with Washington insiders.

“When I got home, I jotted it down and began writing a few weeks later. I'd read a lot of mystery novels over the years but had never taken a course about writing fiction. I simply tried to imitate what I'd read. The characters in the novel are completely fictional, but I tried to create people who could actually work on Capitol Hill. Snippets of the plot, particularly details about how work is done in a Senate office, are direct reflections of my time working for Congress. These days, there's a lot of negativity about Washington, D.C. and Congress. I tried to write a novel from a congressional staffer's perspective that explains the trials and tribulations of working on Capitol Hill. It's not an easy job, but it is very easy to blame these individuals for the problems we have in the United States. Besides telling a fun whodunit, the novel is meant to convey that message.”

Shogan holds down a high-level, full-time job at the Library of Congress, so all her writing was done in the evening and on weekends.

“I dedicated one hour each night to it, setting reasonable goals along the way to keep me on track.”

All in all, it took about three years for her to write the manuscript, find an agent, and sell the book, which was “Not bad at all, considering how many other writers have good stories they'd like to see in print,” she says. “I benefited from meeting numerous mystery writers along the way, a few good friends who read early drafts of the manuscript and gave me comments, and a Washington D.C. Independent Review of Books one-day conference that explained the ‘business’ of fiction writing to me.”

Once the book was written, Shogan joined an online critique group, which she found “quite helpful.” She also worked with Stephen King's first editor, Michael Garrett, to tighten up the draft. Then she started shopping the manuscript to agents.

Shogan went online, and “after some research and talking to several authors who had been successful in the genre, I understood what I needed to do in order to sign with an agent and a traditional publisher. There were many rejections along the way. I saved them all in an email folder and never let them deter me!  When editors or agents provided thoughtful advice, I took it into consideration and made changes, but I never became discouraged about the manuscript. In that sense, the process was no different from completing a dissertation. There were ups and downs along the way, definitely bumps in the road. But if you have faith in the project, eventually the smaller problems will be solved and the final result will speak for itself.”

It took her about six months to find an agent who was not only enthusiastic about the book but also interested in a series of mysteries about the inner workings of government.

“After I signed with my agent, she helped me with additional edits and then shopped the book to publishers. We settled on Camel Press, a mid-size publisher and division of Coffeetown Press. They met all the criteria that mattered to me: an approved publisher of the Mystery Writers of America with contracts for novels in both print and e-book formats. I was happy to sign a three-book deal with them. I was involved in the editorial process with them, and they generously sought my input when designing the cover of Stabbing in the Senate.”

Writing a murder mystery was not among her original career goals.

“If you had told me five years ago that I was going to write a mystery novel, I would never have believed it,” Shogan says. Her first professional moves were far more traditional. After graduating from Yale, she was an assistant professor at George Mason University from 2002 to 2006, and then worked in the Senate for three years before joining CRS. CRS is the administrative unit of the Library of Congress that provides non-partisan research and analysis for Congressional committees and members of the Senate and House.

As a political scientist, Shogan already had one book under her belt: The Moral Rhetoric of American Presidents, a scholarly analysis of the president's role as the nation's ethical spokesman, based on her dissertation. In the book, she demonstrates that moral and religious rhetoric is a strategic tool presidents can use to enhance their constitutional authority. In addition to her books, she has published numerous articles on Congress, the presidency, and women in politics in such journals as Perspectives on Politics, Polity, PS, Studies in American Political Development, and Social Movement Studies, as well as essays in Roll Call and the Washington Post. She is a member of the American Political Science Association, serving on the APSA Centennial Center Advisory Board.