A Scientific Breakthrough on West Campus 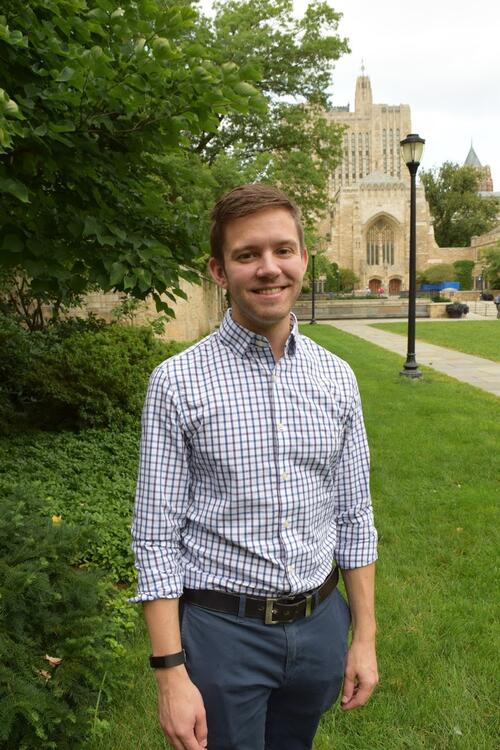 Breakthroughs in synthetic biology verging on a complete revolution of the field are all in a day’s work for Karl Barber, who completed his Ph.D. in Cellular and Molecular Physiology at Yale in 2018. In recognition of his achievements, Barber was invited to join the inaugural class of Schmidt Science Fellows, a post-doctoral fellowship program under the auspices of the Rhodes Trust. As part of the fellowship, Barber will be working in Stephen Elledge’s lab at Harvard Medical School.

“Yale has opened every door for me. I felt like the sky was the limit in terms of things I could have done with my Ph.D. So many people are doing exciting academic and non-academic things here, and once they complete their degrees,” said Barber, reflecting on his years of graduate study on Yale’s West Campus, “At Yale, I had the truly unparalleled experience of being able to work in the top biology labs in the world. This is a community of highly collaborative researchers.”

Working in Professor Jesse Rinehart’s lab on West Campus, Barber developed a system to change the way proteins are synthesized in E. coli, to produce authentic human-like proteins containing a modification called phosphorylation for both medical and basic biological research.

“Biologists want to know which proteins interact with each other because diseases can arise when these interactions go wrong,” said Barber, in a statement announcing the publication of his and other researchers’ findings in the journal Nature Biotechnology. “Our latest work allows us to systematically determine the importance of phosphorylation in these interactions across all known human proteins in our engineered E. coli strain.”

“This is a major breakthrough in the field of synthetic biology and biotechnology. It’s really exciting work,” said Professor Rinehart, Barber’s principal investigator and one of his mentors. “We haven’t been able to address the challenge of working with human genes and human proteins with this level of precision and scale in the past. What makes this project so special is the combination of innovation, utility, and scale. We’ve put out a biotechnology that other labs and researchers around the world will be able to use and immediately start doing their own work.”

Barber identified the highly collaborative research culture on West Campus as a major factor in his development as a scientist.

“The high level of collaboration between Jesse Rinehart’s lab and Farren Isaacs’ lab was incredible,” Barber said. “I really felt like I had two major mentors involved in my growth as a researcher and biologist. I’m also so grateful to Dr. Emile Boulpaep in my department who was incredibly supportive. I took three classes with him, and each was better than the last. I’ve been so fortunate to have such an amazing network of instructors, mentors and colleagues at Yale.”

The Medical Research Scholars Program, which provides Yale Ph.D. students with “medically oriented coursework and a mentored clinical experience” was also crucial to Barber’s research, and in his interest in developing personalized medical technologies to fight cancer. The experience affirmed for Barber the importance of framing his research in a way that would have the highest impact for patients in a clinical setting.

Although Barber is primarily interested in working in a research setting, he noted that the experience of teaching Yale students helped hone his ability to explain his own research, as well as more general concepts in biology.

“You never realize how little you know until you have to teach it to someone else,” Barber said with a laugh.