Seeing the Invisible: Rethinking Stereotypes of Race and Gender

“Modern society is both androcentric (or male-centered) and ethnocentric (or White-centered),” says Yale College alumna Erin Thomas (Psychology). Members of society who don’t fit into those categories (i.e., racial minorities and women) “are perceived as socially deviant and are subject to backlash when they violate prototype expectations,” she says. 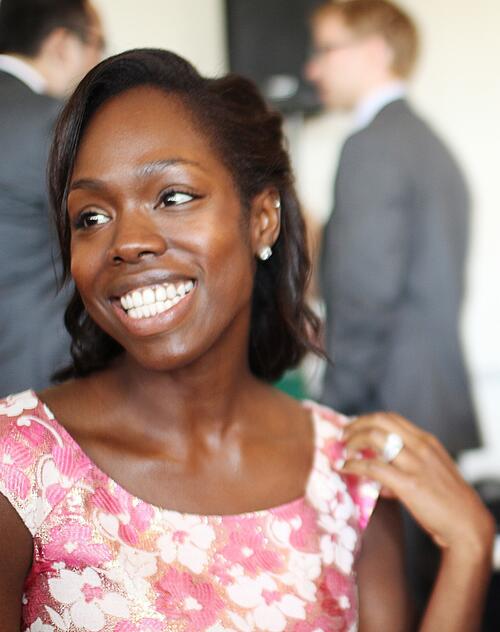 Erin studies how “inequalities are constructed and reinforced through subtle processes of framing social norms.” Her research aims “to identify the contributing factors, manifestations, and consequences of positioning White Americans and men as normative and Black Americans and women as deviating from prevailing norms.” Her dissertation, titled “Lost in the Categorical Shuffle: Evidence for, Consequences of, and the Amelioration of Black Female Invisibility,” is advised by John Dovidio. Victoria Brescoll and John Bargh are also on her committee.

Erin is currently investigating the phenomenon of “intersectional invisibility,” which she defines as “the overlooking or ignoring of individuals with multiple disadvantaged social identities. My research focuses specifically on Black women, who possess both race and gender group memberships that deviate from the American prototype of a White man.”

Born and raised on the south side of Chicago, Erin attended Our Lady of Perpetual Help School and graduated with First Honors from St. Ignatius College Preparatory School in 2003 before coming to Yale to earn her BA degrees in Psychology and International Studies in 2007. “Although I attended parochial schools, I am not Catholic. My parents valued education so much that they incurred great expense to send my sisters and me to the best schools in the city. I credit my successes to the support of family: my father Edward, mother Alicia, older sister Erica, younger sister Danielle, and my grandmother Dorothy Wilson.”

Having attended predominantly-White schools her whole life, she has “always been highly aware of, and reflective on, people’s reactions to racial (and other) differences. My dissertation research focuses specifically on the intersection or combination of race and gender because these two identities have been investigated separately for decades within my field, but they are, of course, experienced simultaneously. There’s been a really interesting momentum among researchers who are beginning to pay more attention to our discipline’s historical oversights. It’s so exciting to be one of them.”

Erin’s project so far has focused on invisibility from the perspective of perceivers, but “in the future, I aim to examine the health and social consequences of non-prototypicality on minority women themselves.” Her methodology includes analyzing existing datasets to which she has access through her consulting work for Catalyst, Inc., a non-profit that aims to increase opportunities for women in the workplace, and her fellowship with Consortium for Policing Leadership in Equity (CPLE), a research group that works with police agencies to promote transparency and accountability. She also uses field and Web-based experiments, computerized reaction-time studies, lab experiments matching pairs of participants, and economic game paradigms.

“I want to conduct at least one focus group for minority women at Yale before I graduate, and I hope that interested women reading this article will contact me.”

In one experiment, she and her adviser demonstrated that Black women are perceived as non-prototypical members of both their race and gender in-groups. Participants were slower to associate Black women than Black men with the category “Black,” and slower to associate Black women than White women with the category “woman” in a speeded categorization task that measures test subjects’ reaction time when sorting images into groups. In another study, “we replicated and eradicated this reaction time difference. By making the phenomenon of intersectional invisibility explicitly salient to participants and encouraging them to avoid succumbing to it, we narrowed the reaction time gap between Black women and their same-race and same-gender counterparts.”

In another experiment, she tested the hypothesis that Black women experience intersectional invisibility because they are perceived to be less relevant to other people. This study gave participants a limited number of raffle tokens to allocate to their opponents in a competitive economic game. Under ‘resource threat,’ subjects gave fewer resources to White male opponents than to White female or Black male opponents. “Participants awarded the most resources to Black female opponents, presumably because Black women were perceived as the least viable threats to participants’ economic outcomes.”

In a second version of this experiment, “we relabeled the economic game as ‘The Community Game’ to discount the possibility that Study 1 participants allocated resources based on opponents’ relative economic needs.” This version “elicited equal token allocation to White women, Black men, and Black women, and fewer tokens to White men,” supporting her interpretation of the first version of the study and also showing that “Black women may be rendered invisible unless or until perceivers are motivated to pay them attention.”

In addition to her research, Erin is devoted to teaching. She completed the Graduate School’s advanced teaching certification and has been a Teaching Fellow for courses in Yale College, including “Clinical Psychology in the Community,” “Psychology and the Law,” and “Multivariate Statistics,” and for “Managing Groups and Teams” at the Yale School of Management. She was trained for and continues to participate in the Wurtele Gallery Teacher Program at the Yale University Art Gallery (an educational program for K-12 students), and has taught at Quinnipiac University and Choate Rosemary Hall. “My passion lies in empowering students by guiding them towards independence, confidence, and self-sufficiency,” she says.

Erin lives in New Haven with her husband Tony, their cat Pippi, and puppy Sammie. When not hard at work, she unwinds by watching old “Cosby Show” and “Roseanne” reruns. “These shows tackle a lot of social issues that remain relevant today, and they make me nostalgic for my childhood.”