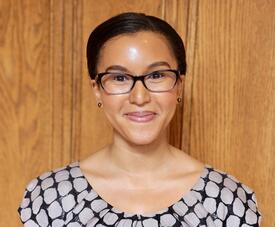 Thuto Thipe, a new PhD graduate of the History and African American Studies departments, is this year’s recipient of the Afro-American Cultural Center’s Award for Outstanding Graduate Research in the African Diaspora.

“This award is an affirmation to me of the value of studying histories of the connections between black freedom struggles around the world, understanding the ways that people in different geographies have learned from each other, and seeing how we can learn from each other going forward,” said Dr. Thipe.

Inspired by the ways black people strategized to resist colonial violence in South Africa and the United States in the mid- to late-nineteenth century, Dr. Thipe’s dissertation Black Freehold: Landownership in Alexandra Township, 1912-1979 examined the history of landownership in Alexandra from its founding in 1912 to 1979, when the state had stripped black freeholders of their landownership and forced removals had largely displaced Alexandra residents.

Over approximately five decades, from 1912 to the early 1960s, black people owned land in Alexandra Township – part of the city of Johannesburg in South Africa – through freehold title deeds. Unlike the few other black freehold areas in the Transvaal province of South Africa, Alexandra fell outside municipal boundaries, which meant the government played a limited role in governance and oversight of the area.

Dr. Thipe plans to share what she has learned with students at the University of Cape Town where she started a lecturer position earlier this year.

“It is important to me to bring understandings of the ties and relationships between the diaspora and the continent to the classroom and to my work,” she said.

“At Yale, I had the enormous privilege of learning from some of the most generous scholars I have known. I have also been inspired by and have learned so much from my wonderful friends and classmates in New Haven. It has been an honor to learn and to grow alongside such brilliant and kind people.”