Exposing the fault lines of racial inequity through pandemic research 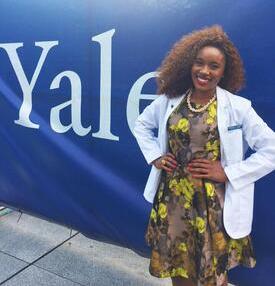 Earlier this spring when the coronavirus spread across the globe and evolved into a full-scale pandemic, many graduate students at Yale switched the focus of their research to help explain and contain the spread of the virus. Some worked on Yale’s saliva-based testing, while others sequenced the genome of the coronavirus RNA. Emmanuella Asabor, a fifth year graduate student in the combined MD-PhD degree program with Yale School of Medicine, is now examining the disproportionate impact the coronavirus has had on vulnerable communities. “I’m particularly interested in how the pandemic has exposed the fault lines of racial inequity in our country,” she explains. Over the past several months Asbor has used a combination of methods, including statistical modeling of disease and disease patterns, working with interview transcripts from people living at the intersection of economic and racial precarity, and conducting geospatial analysis to understand how people’s lived experience in physical space shapes the impact or the toll of the pandemic.

Prior to the coronavirus pandemic, Asabor’s research interests centered around the social, economic, and historical factors that shape people’s experience of their illness and the healthcare system. While many graduate students pursuing combined degrees with the School of Medicine tend to do research in the hard sciences to compliment the MD, Asabor arrived at Yale knowing she wanted to focus her doctoral research on the external factors to biomedicine, with an emphasis on vulnerable and underserved communities. “I am a Nigerian immigrant and I have called New York City home since my early childhood. I think early experiences with homelessness and other aspects  of urban poverty have definitely imbued my research with a sense of commitment to communities that are really similar to the ones I knewgrowing up,” Asabor explains.

Asabor first considered studying the social dimensions of healthcare alongside medicine as an undergraduate student at Harvard University. There, she took an introductory course on medical anthropology when a scheduling conflict prevented her from taking other pre-med courses. “I had a free slot [in my schedule], but that class ended up changing the entire trajectory of my research, because it's where I first saw that there was this formal field of study where people looked at how social factors shaped people’s experiences with health,” she said. Asabor graduated from Harvard in 2013 with a bachelor's degree in the History of Medicine. From there she obtained a master’s degree in African Studies from the University of Cambridge.

Upon the completion of her master’s degree, Asabor moved back to the United States and worked for the New York State Department of Health where she was based at the NYU School of Medicine. “There I worked with an emergency medicine physician who was really passionate about making care more equitable for homeless people.” Asabor felt like she was part of creating a meaningful impact through this work and it was during this time that she began to think about some of the potential policy implications of her future research. “I had a sense that I would probably want to go on to medical school and that I might consider graduate study as part of that, but I wasn’t sure what discipline I wanted.”

As Asabor continued to formulate a plan to return to school, she briefly worked on patient quality and safety initiatives at Montefiore Medical Center, a social safety net hospital serving a diverse patient population in the South Bronx.

In reflecting upon how her career trajectory helped shape her graduate research, Asabor, who began at the Yale School of Medicine in 2016 and is now in the second year of her doctoral research, admits her path did not feel linear at the time. “I think I was trying to soak up as many experiences as I could before committing to what I knew would be an 8 year degree program.” Before returning to an extended schooling experience Asabor wanted to make sure she had the answers to questions that guide many graduate students: “What am I most passionate about and what am I willing to dive deeply into as a doctoral student?”

Now, several months into her research on the community impact of the coronavirus, Asabor is encouraged by the openness she sees among other researchers and the broader public to thinking about the socioeconomic factors of people’s health experiences. “I’ve found that audiences that typically have not prioritized this field of inquiry are starting to pay a little bit more attention,” she said. Asabor is optimistic about this newfound attention and anticipates that greater collaboration across fields will result in more solutions that meaningfully impact people in the most need of help, particularly in catastrophic health emergencies such as a pandemic. “There’s been an huge coming together and there’s been a lot of rhetoric around coming together,” say Asabor, “and I think my hope is that we actually fulfill those promises and that we genuinely do embrace partnerships between community members and researchers–between researchers in different fields–to come together with solutions that really shift the locus of power and begin to give some of that power back to people who belong to structurally marginalized communities.”

Amidst Asabor’s research on health disparities within particular communities, she has done a great deal of reflection upon the role of community in her own life, particularly as a graduate student at Yale. “I think especially for extended degree programs, community is super important,” she notes. For Asabor it is important to be intentional about community building and to create time for it during one’s busy life as a graduate student. She attributes some of her best learning and most fun to the peer networks and peer mentoring groups she has been a part of while at Yale.

Also during Asabor’s time at Yale, she has also learned to turn her perceived weaknesses into her strengths. “I used to look at aspects of my personal identity as obstacles to overcome and things to potentially hide and minimize within myself. What I've learned is there’s no such thing as completely objective research. All of us come with things that inform everything including decisions about which important research questions to tackle.” Asabor’s  advice to present, future, and incoming graduate students to view their unique experiences, backgrounds, and perspectives as opportunities for innovation and creativity. “They have something unique to contribute that literally no one else has,” she affirms. “Their chosen field needs them and their voices to move forward.