Scholarly gatherings are an important part of academic life. When experts in related fields come together to share their discoveries and exchange ideas, they motivate one another to think in new ways, keep current in their discipline, and expand the store of human knowledge.

The Graduate School actively encourages current students to develop the professional skills needed to carry out these responsibilities. Student­run symposia are ambitious undertakings.

Organizers first must choose a theme or topic and a date and then handle all aspects of planning and execution. They have to send out a call for papers, choose who will give presentations, select and invite a keynote speaker, work out a budget, seek funding, and manage the logistics of room reservations, refreshments, audiovisual equipment, publicity, poster design, program printing, and more. The Dean's Fund supplies some of the funding, and organizers usually request support from their departments and other units on and off campus.

Yale’s German Department was the very first to institute an annual graduate student conference, twenty four years ago. This spring's symposium is set for March 29 and 30, and the theme is “Voicing Revolution. Formation and Formulation.” The fourth­year student organizers explain it this way: “WhenOccupy Wall Street started gathering momentum in 2011, it appeared that there were no fundamentally programmatic declarations of intention. What has been dubbed the Arab Spring unfolded in a similar way. And yet, many observers agreed that the movements’ inclusive force was due precisely to this ‘lack.’ In the face of these altered manifestations of political discontent, we ask: how does revolution enunciate itself?”

At the other end of the spectrum, the Yale Program in Judaic Studies held its inaugural graduate student conference this fall, titled “Circulating Jews: Mobility, Cultural Transmission and Representation in Judaic Studies.” The symposium addressed the movement of Jewish people and ideasthroughout history. Organized by Shari Rabin and Sara Ronis, both doctoral students in Religious Studies, the conference brought eight emerging scholars from seven universities in the United States and Europe. Presenters looked at the theme through the lenses of religious studies, history, English literature, and philosophy, and from late antiquity to the modern period. Marina Rustow, professor of history at Johns Hopkins, gave the keynote address on “Geographic and Doctrinal Dislocation among Medieval Jews.”

According to Sara, “The goals of the conference were to foster collegiality and discussion among emerging scholars in diverse disciplines working in areas of Jewish studies, and to reframe Judaic studies within the context of mobility and cultural transmission. We chose 'Circulating Jews' because it had equal opportunities for exploration in the ancient and modern periods, and it seemed likea fruitful topic with which to think through the Jewish experience throughout history.”

Attendees came from Yale, Columbia University, Universita degli Studi di Verona, and the universities of Indiana, Texas, Michigan, and Pennsylvania. Because the conference took place the weekend after Hurricane Sandy, “there were definite logistical issues in getting all our presenters to Yale,” Sara says. Despite the hard work and storm­created challenges, “It was really great to meet graduate students from other institutions who are working on related but different topics. It was also lovely to see a conference through from beginning to end. It was satisfying to have it all come together and hear how much people appreciated and enjoyed the day.” She and Shari also enjoyed being able to coordinate an ambitious, complicated event while still at Yale, “where we had access to advice and mentoring from the professors in our program. We could not have done any of this without the help andsupport, both financial and academic, of the Program in Judaic Studies at Yale, and especially of Professor Steven Fraade. Renee Reed, the administrator for the Program in Judaic Studies, gave us tireless support that made everything about the conference possible.” 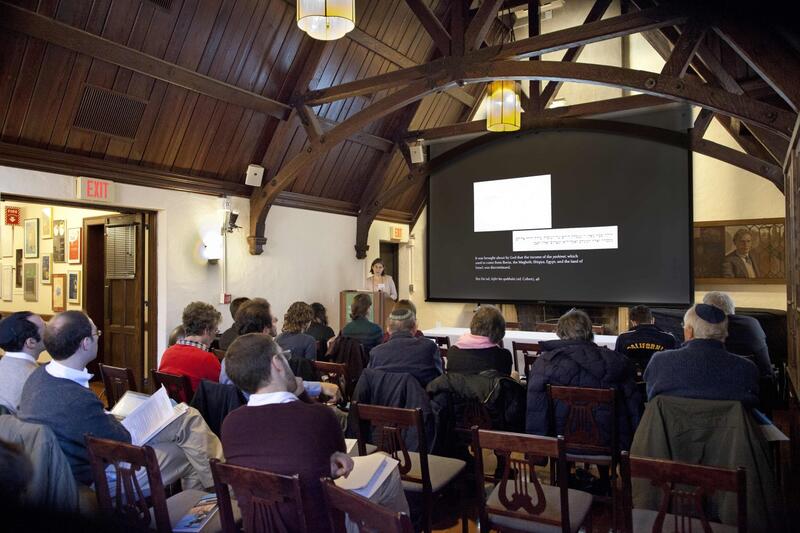 For years, students in the Film Studies Program have coordinated an annual symposium. This year’s conference, “Expanding Cinema: the Spatial Dimensions of Film Exhibition, Aesthetics, and Theory,” is set for February 15 and 16 in the Whitney Humanities Center. All events are free and open to the public without pre­registration. http://expandingcinema.wordpress.com.

“Since the 1980s, technological developments and changes in the economics of film distributionhave eroded classical models of film spectatorship, and in recent decades this trend has only picked up speed,” say organizers Mal Ahern (Film Studies), Andrey Tolstoy (Film Studies), and Luca Peretti (Italian). “Contemporary viewers encounter cinema across a variegated landscape; they are exposed to moving images in taxis, on portable devices, in art galleries, and as part of large­scale public artworks.”The conference aims “to engage theoretically with the spatial dimensions of cinema as it expands beyond its traditional theatrical environment.”

The keynote speaker will be Giuliana Bruno, professor of Visual and Environmental Studies at Harvard. She is author of Atlas of Emotion: Journeys in Art, Architecture, and Film, which won the Kraszna­Krausz Book Award for “the world's best book on the moving image” and was named a Book of the Year in 2003 by the Guardian.Faculty advisers for the symposium are John MacKay, Francesco Casetti, and Ronald Gregg. On the opening night of the conference, instead of a traditional film screening, the conference will feature a live performance by experimental filmmaker Ken Jacobs. His “Nervous Magic Lantern” is a hand­manipulated projector that creates moving images and “hallucinatory optical effects,” according to Mal, without the use of celluloid film or video.

“There are two great benefits to hosting graduate­ student ­organized conferences at Yale,” says Mal. “First, we get the benefit of actually organizinga conference, of learning firsthand everything that goes into it. Second, we receive the benefit of being able to host scholars from other universities who work in our field – to forge new intellectual friendships and professional connections that will last us for the rest of our careers. One of the biggest surprises we faced was also one of our biggest challenges: we received an overwhelming number of submissions to the conference, so many that we were faced with the difficult task of turning down interesting work from scholars we know and respect. Another challenge and satisfaction has been forming our budget and raising money for the conference. As more departments and funding sources have responded positively to our requests, we've been able to alter our schedule so as to incorporate more elaborate and interesting events.”