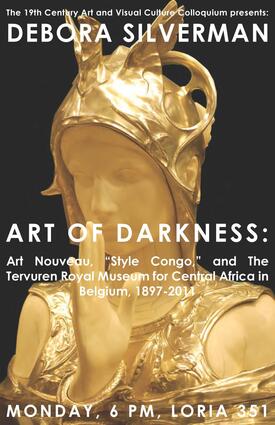 This year’s colloquia include the ELLMM City Philosophy Group, the Biological Anthropology Colloquium, the Yale Arabic Colloquium, the Photographic Memory Workshop, the Urban History Working Group, and the Yale Architectural Forum. Each is based in one or more academic departments. History of Art sponsors five colloquia; English Language & Literature, six. Most, but not all, of the current colloquia are interdisciplinary within the Humanities and Social Sciences.

The 19th-Century Art and Visual Culture Colloquium brings together faculty and students whose work is focused on art, architecture, and decorative arts from the 1780s through World War I. Founded in 1999, the group meets once or twice a month to discuss papers by members of the Yale community and visiting scholars. 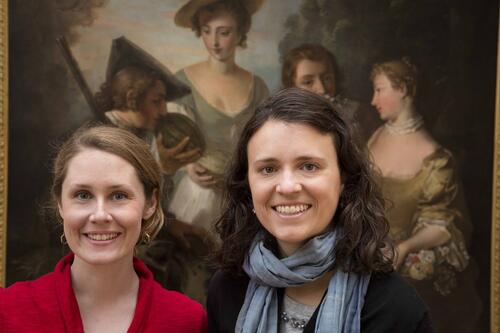 “Our conversations have come to reflect not only the cosmopolitan impulse of the period, but also the complex intersection of media that created new possibilities for painting, sculpture, architecture, print culture, and material culture over the course of the century,” says Laurel Peterson (History of Art), who runs the colloquium with Izabel Gass, advised by Professors Tim Barringer and Carol Armstrong. This year, their theme is “From Table to Tableau: Food in 18th- and 19th-century Visual Culture,” including “the relationship between the gustatory and the visual, the social history of food in an increasingly globalized economy, and commercial and utilitarian representations of food.” Their first event was an “Art of Food” potluck, at which participants presented works of art depicting food.

Every year, the colloquium invites one guest lecturer. This year Debora Silverman, professor of History and Art History at UCLA, spoke in December on “Art of Darkness: Art Nouveau, ‘Style Congo,’ and the Tervuren Royal Museum for Central Africa in Belgium, 1897-2011.”

According to Laurel, “The colloquium not only helps to expand our knowledge of the art and visual culture of the 19th century, but also provides us with exposure to scholars working in the field at Yale and around the globe.”

The British Studies Colloquium, one of the oldest and most active at Yale, meets in the Yale Center for British Art weekly when classes are in session, primarily to hear talks by Yale graduate students. 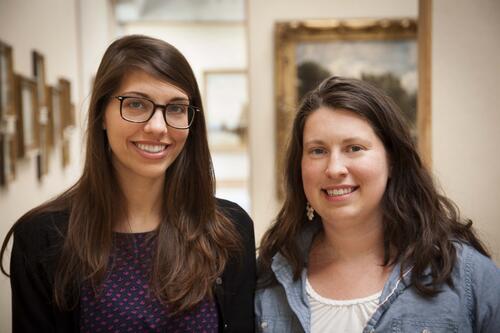 “What drew me to the colloquium is that it is an informal and interdisciplinary setting for graduate students to share their work and receive feedback,” says Melina Moe (English), who has organized the group for the past three years. Natalie Prizel (English) now shares the leadership. Participants come from the departments of English, History, History of Art, Music, and more.

This semester’s speakers include James Caudle, associate editor of the Yale Boswell papers, on an exhibit at the Walpole Library; Edward King (English), on Caribbean and Anglophone literature; and Margaret Deli (English), on 19th century panoramas and the rise of Victorian “Egyptomania.”

“Planning the colloquium has shown me that the academy is a dynamic enterprise, a thriving community comprising lively and passionate minds.”
- Lukas Moe (English)

This year, they have invited guest speakers to investigate interdisciplinary approaches to 20th-century literature and the arts: cultural studies, literary theory, gender and sexuality studies, philosophical and linguistic criticism, postcolonial theory, and critical race studies. Jared Gardner, professor of English and film studies at Ohio State University, spoke on early American visual culture and graphic narrative on March 29, and Ravit Reichman, author of The Affective Life of Law: Legal Modernism & the Literary Imagination, will give a talk on law and literature on April 4. To round out the year, the colloquium will host a panel discussion, “Spiritual Technology,” featuring Katie Lofton (Sarai Ribicoff Associate Professor of Religious Studies and American Studies at Yale), John Lardas Modern (associate professor of Religious Studies, Franklin and Marshall), and the colloquium’s faculty adviser, John Williams, assistant professor of English.

“The Theory and Media Colloquium is unique for the English Department in that it is the only one that isn’t pegged to a historical period (e.g. Medieval/Renaissance) or national tradition (e.g. Americanist),” Lukas says. “As such, we can be methodologically adventurous and pursue the discourses at the margins of the other colloquia as well as explore possibilities of cross-fertilization with other disciplines.”

“This is my second year coordinating the colloquium, and it has been an amazing experience,” he adds. “I’ve learned how to plan a year’s worth of events, communicate with professionals of various kinds, responsibly and convincingly apply for grant money, and keep a budget. Beyond that – and more important than that – planning the colloquium has shown me that the academy is a dynamic enterprise, a thriving community comprising lively and passionate minds.”