Studying a 'Complicated Process': Research on Advertising through the Lens of Sociology 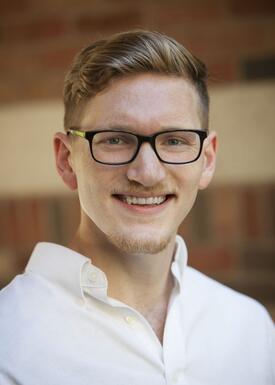 Andrew Cohen (Sociology) has been interested in advertisements for a long time.

“You get bombarded with ads every day, but did you ever wonder why it was that particular ad, with that particular model, and that particular tag line?” Cohen asks. “Hundreds of decisions, collective and individual, go into making a single ad. What's guiding those decisions that determine what audiences see?”

He double-majored in advertising and sociology as an undergraduate at Fontbonne University in Saint Louis, Missouri, and had a summer internship at an ad agency that became the basis for his senior thesis. As graduation approached, he applied to ad agencies all over the U.S., intending to make a career as a copywriter. At the urging of his adviser, and almost on a whim, he sent off one application to graduate school. And then, right in the middle of an interview for an ad agency job, he got a call from the DGS of Sociology, offering him a spot at Yale.

And so, instead of producing promotional material to sell products and services, Cohen is writing a dissertation on “Advertising as Cultural Production.”

To date, there hasn’t been much rigorous empirical research into this topic, especially from the perspective of social theory. Cohen is breaking new ground with his study, advised by Professor Frederick Wherry, who specializes in cultural and economic sociology. Jeffery Alexander, the Lillian Chavenson Saden Professor of Sociology, is co-chair of Cohen’s dissertation committee.

“Making advertisements is a complicated process, because there are a ton of stakeholders involved. Worse still, many of these stakeholders don't see eye to eye, nor do they agree on what they should be doing or how it should be done. There's also a lot of internal politics within agencies, clashing egos or — more commonly — simple miscommunication,” Cohen has found.

He looks at both words and images to determine how “advertising professionals identify — or, really, create — their target audiences. Figuring out your target audience is a complicated, nuanced process that involves more than just what your research tells you,” he says. Because he is interested in “anything an advertising agency makes,” his focus isn't limited to the ads themselves. He studies the way professionals relate to their products, their audiences, and their colleagues.

“I'm super-curious about how people make stuff:  how they start, how they know when to quit working on something, how they feel good or bad about what they've made, and how they form or reflect their own identities in the process.” His approach is “definitely qualitative,” he says, and his goal is “to do what [cultural anthropologist] Clifford Geertz called ‘thick description.’ If I do my job correctly, you should read my work and think to yourself: ‘Oh, well, when you put it that way, of course they do that!’”

Cohen conducts field research in advertising agencies, both as an observer and an intern. “Watching and working the daily life of an ad agency gives me a unique look at the kinds of decisions advertising professionals face, including how those decisions are framed and then decided on. I also interview the people at these ad agencies, to get more deeply into their thinking. How do they understand what they're trying to do?”

Cohen was born in Kansas City, Kansas, and moved to Rochester, New York, when he was about 10. His interest in sociology was sparked in high school, when he took a course offered through Syracuse University.

“It was basically an introduction to sociological thinking, looking at gender, race, inequality, subcultures, and so on. If you did well in the course, Syracuse offered a college credit for it. I loved the course, and when I got to Fontbonne, I transferred my credit from Syracuse and picked up the major.

“Coming to Yale was honestly a stroke of luck. I had rejected the idea of grad school for a long time until one of my sociology professors, Dr. Deborah Phelps — a Yale graduate herself — mentioned that most programs offered a stipend. Yale's stipend actually outdid what any ad agency would offer me starting off; how could I turn down a bigger paycheck AND a chance to be called ‘Dr. Cohen’ for life?!”

Outside of academics, Cohen likes to hike and climb, play bass and write music, and exercise.