Jeffrey Guhin (Sociology) is doing research that draws on both his intellectual interest in the sociology of religion and education and his own personal history. 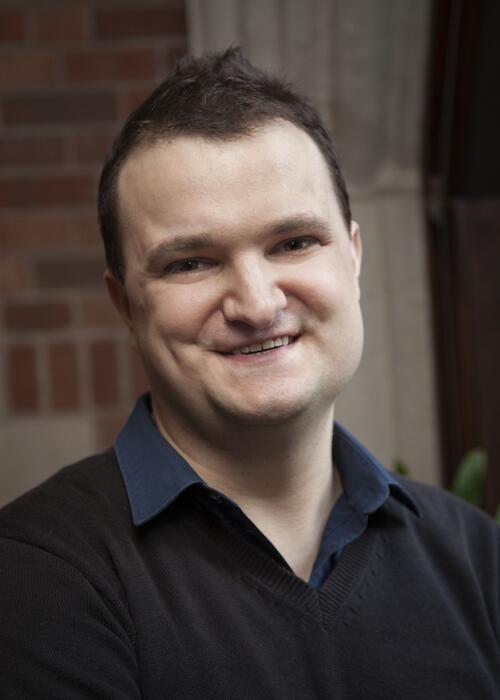 Tentatively titled “Moral Technology: Science, Religion, and Right Action in Evangelical and Sunni Schools,” it is a comparative ethnography of four conservative religious high schools in the New York City area: one urban and one suburban Muslim school, and one urban and one suburban Christian school. He is analyzing how they reconcile science with belief, how and why they pray, and how they establish and maintain their sense of identity. His adviser is Philip Gorski.

Using interviews and participant-observation in each of the schools, he asks: “How do these communities explain the relationship and occasional disconnect between scripture and science education? How does prayer 'work' in these communities, e.g., what is it used to accomplish, and how is that use taught and understood? How does the massive amount of information and identity-exploration provided by the Internet strengthen or challenge these communities? And how does the use of authority by teachers, students, and staff affect students? All of these questions will help me to understand how these communities are able be ‘in the world, but not of it.’ ”

Growing up with a father in the Air Force, Jeff and his family moved around a lot, spending two or three years in each place before relocating. With his parents and four younger siblings, he lived in North Dakota, Kansas, Nebraska, and Washington, and although he admits he didn’t like pulling up roots so many times, “I think the skills I gained from all the moving helped me a lot as an ethnographer. I was forced to adapt rapidly to new situations, get to know new people quickly, and become aware of the contingencies of culture. I also read a lot, because it would take a while before I got invited to friends’ houses, and, well, I liked to read.”

One of the few constants in his childhood was Catholicism. “No matter where we went, the Mass was always the same. I became a pretty serious Catholic (I still am), especially when I went to a Jesuit high school and then Loyola, a Jesuit university in New Orleans, and learned that my commitment to social justice was because of, rather than apart from my faith. So I knew I wanted to study religion, and, based on my experiences, I knew I wanted to study schools. But the specifics played themselves out a bit more unpredictably.”

After college, Jeff biked across the country from San Francisco to New York City, where he lived for four years. He did casework in the South Bronx with “Dominican Volunteers USA,” which, like Americorps, provides service opportunities. He lived in a community of Dominican sisters and worked with families who were deemed “at risk” of abusing or endangering their children.

“One evening, walking home through a park in the Bronx, I realized that what I liked was working with young people and reading novels.” He decided to become an English teacher. “I had zero training in education, but I knew Catholic schools didn’t require certification,” so he applied for and landed a job at a Catholic girls' school, where he taught and advised the yearbook, drama, newspaper, and other clubs. “Teaching high school was the most meaningful experience of my life and the most important work I’ve ever done.” He also did some freelance journalism, but realized that he wanted to explore topics in greater depth, using “a more rigorous methodological and theoretical grounding than I had.” And so he applied to graduate school.

By the time he came to Yale, Jeff knew he wanted to learn more about Islam and spent two summers in Syria studying Arabic.

“I also was becoming increasingly fascinated by Evangelicals, based on my own reading and various presentations at Yale’s Religion and Politics Workshop. One of my committee members, Mitchell Stevens at Stanford University, recommended I compare Evangelicals and Muslims in the United States and Amman, Jordan, and that’s what I planned on doing. But as I started my fieldwork at two New York City area schools, I realized that there was no way I could compare these schools to schools in Jordan without being sloppy. There were just too many different variables.”

Although the dissertation is a work in progress, he’s already come to some interesting conclusions about the similarities and differences among the schools he has been studying. “I’m struck by how useful prayer and scripture are in these communities, and how they really are quite adaptable ‘technologies’ to address individual and social problems. I’m also struck by how access to these technologies works in the schools. For example, there was much more explicit discussion of prayer in the Muslim schools than in the Evangelical schools, where prayer was sort of taken for granted. There was also a lot more confidence in ability to discuss the Bible at the Evangelical schools; at the Muslim schools, in contrast, students would say they had to talk to their teacher or sheikh.

“One of the coolest similarities between the two groups is how both have what Christian Smith, in describing Evangelicals, calls ‘distinction with engagement’: there’s an attraction to and appreciation of the secular United States, along with a marked desire to show how ‘we’re different.’ ”

Jeff lives in Manhattan with his wife Mary Katherine Sheena, a 2006 graduate of Yale Divinity School who teaches theology at a Jesuit high school.