Studying Microvasculature and the Effect of Chronic Inflammatory Disease

Holly Lauridsen (Biomedical Engineering) studies microvasculature, the smallest blood vessels in a body, and what chronic inflammatory diseases do to those tiny vessels. Her work, in Anjelica Gonzalez’s lab, brings together interests that she has pursued for years.

She first became involved with biomedical research in high school, after her grandmother was diagnosed with Parkinson’s disease. “I had a fabulous opportunity to work in Dr. Pam Lein’s lab at Oregon Health and Science University as a high school student and continued working there my first summer in college.” The lab investigated pesticides and other environmental and occupational toxins that are linked to altered neuron function. 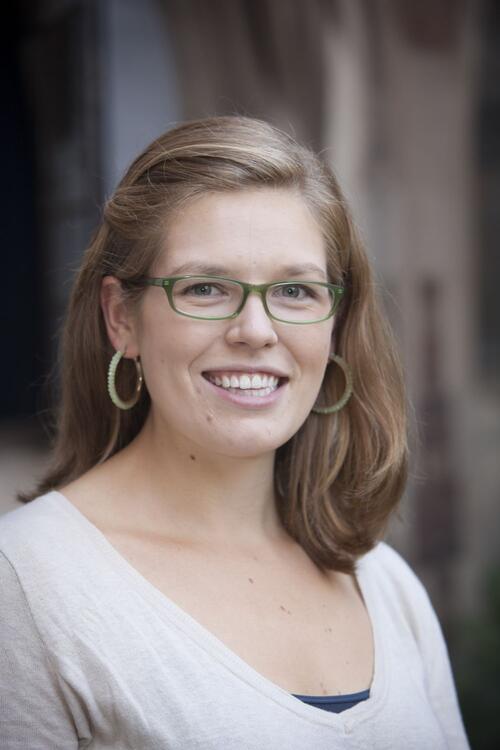 She loved science, and in her sophomore year at Brown, her courses in biomaterials and biotechnology courses sparked a new interest. “I became fascinated with the heart and many of the current technologies that are used for different diseases such as stents and ventricular assist devices.” That summer, through the Amgen Scholars program at UCLA, she worked in a lab studying vasculature.

“The experience surpassed any of my expectations and really piqued my interested in vascular health and biomaterials for vessels,” she recalls.

Holly’s doctoral project builds on experience she already had and allows her to master new skills and expand her knowledge base. The Gonzalez lab works with human pericytes, a kind of vascular support cell that has only reliably been isolated and cultured since 2010. In constructing models, the lab uses a polymer known as polyethylene glycol, which was also new for Holly, since her undergraduate work had involved metal biomaterials.

Daily life in the lab involves culturing primary human endothelial cells and pericytes. Using microscopy and other analytical tools, she looks at how vascular cells respond on different substrates and to different inflammatory signals. Holly also designs and tests new models that more accurately replicate human tissue. Using these models, Holly is investigating how a type of white blood cell known as a neutrophil interacts with the endothelial cells and pericytes. “In inflammation, neutrophils migrate through the vascular wall to the site of infection or injury. This process can be altered in certain chronic diseases, so we hope that by replicating it in the lab, we can better understand how to develop therapeutics,” she explains.

Outside the lab, Holly teaches and writes about science. She was one of the speakers at the April “Science in the News” presentation, titled “OMG GMOs: Food for Thought”.

“Despite all of the political controversy surrounding GMOs, in this talk, me and my fellow speakers (Michael Grome and Robert Buchkowski) wanted to focus on the science. We covered the basic genetic principals that make GMOs possible and discussed how that compares to traditional breeding techniques that have been used by farmers for hundreds of years. We talked about the science behind a lot of the common GMO crops such as corn, papayas, and soybeans and discussed the technologies used to make crops herbicide-resistant and pesticide-resistant. Lastly, we looked at some of the regulations and decisions that need to be made, going forward.”

In addition to “Science in the News,” Holly participates in the School of Engineering and Applied Science’s Advanced Graduate Leadership Program (AGLP), which allows engineering students to spend one semester working in another field that can help prepare them for a future career. Holly chose to focus on communications.

“I have always loved science and I become frustrated when people automatically assume that they cannot understand it,” she says. “In reality, science is like everything else: when you break down the jargon and present ideas in a clear way, it is very easy to understand. This semester, I have been working in Yale’s Office of Public Affairs and Communication to help write stories about science for a broad, non-scientific audience. It has been a fantastic change of pace. The writers at Yale are incredible people and have been exceptional teachers.”

Holly is helping organize a seminar that will run in the fall for graduate students and post-docs who want to learn to communicate effectively about science. This project is in collaboration with the Center for Scientific Teaching at Yale, which trains students to be science educators. Holly works on that with Robert (Bob) Bazell, adjunct professor of Molecular Cellular and Developmental Biology and former chief science and health correspondent for NBC News.

Outside of her scientific pursuits, Holly has been very active on campus. One of her central affiliations is with the McDougal Center for Graduate Student Life.

The Graduate School’s orientation week for new students, which is primarily coordinated by the McDougal Student Life office, “was so helpful for me. It is where I met my core group of friends at Yale. I was so impressed by how welcome I felt when I arrived — I really wanted to help others have that same experience,” she says. “The Fellows that I got to know during my first year were all kind and funny people, and I wanted the opportunity to continue to meet people like that from other departments and schools at Yale. Being a Fellow has been a wonderful experience. It has made me feel connected to the Yale community as a whole.” In her first year, Holly was a McDougal Social Fellow, and this year she is the student coordinator. “Being a coordinator has been enlightening,” she says. “I have been able to gain a deeper understanding of the workings of the university.”

Holly is completing her first year as a Graduate Student Assembly representative, which she has enjoyed because “GSA provides insight into areas of the university that being a McDougal Fellow does not.” She is also a Graduate Affiliate in Ezra Stiles College, which gives her “a wonderful chance to connect more to undergrads that I work with in lab, student organizations, and classes.” She is also currently the treasurer of STAY (Students and Alumni at Yale), which is “a fantastic organization. Like the McDougal Center, it has a broad aim and incorporates many different communities on campus. Unlike many other student groups, it has a lot of highly involved alumni. STAY allows students to think beyond New Haven and their time at Yale.”

Despite her research and all those other commitments, Holly still finds time to enjoy life. She enjoys spending time with friends and family and makes time to bake, bike, and travel, including a recent trip with her boyfriend to swim with whale sharks.