Studying the Origins of Obesity in Samoa 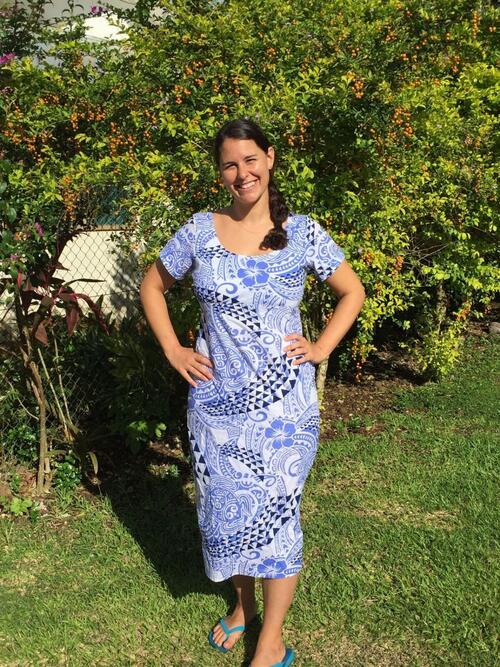 Kendall Arslanian (Anthropology) is spending seven months on the island of Upolu doing fieldwork for her project, “Nutritional and genetic correlates of infant adiposity in Samoa,” with support from a Downs International Health Student Travel Fellowship.

“Obesity is epidemic globally, and Samoans are among the most at risk,” Arslanian says. According to data from one of her advisers, Assistant Professor of Epidemiology Nicola Hawley, more than 80% of Samoan adults are classified as either overweight or obese. “This high prevalence of obesity among Samoans is a relatively recent phenomenon,” Arslanian notes. It appears to be “heavily influenced by globalization” and “the shift from subsistence agriculture to excess consumption of high calorie, processed foods and sedentary lifestyles.”

“Infants in American Samoa show a remarkably rapid gain in weight but not in length in early infancy compared to U.S. infants,” she says. “We’re interested in whether we see the same patterns in Samoa, with the ultimate goal to identify preventative interventions that can be applied early in life, before the onset of deleterious weight gain. This is why we’re interested in understanding the developmental origins of later obesity.”

Her project takes a biocultural approach, which includes a combination of interviews with mothers, body composition measurements, and investigation of one gene variant. Previous research discovered a gene variant that is extremely rare in most populations but common in Samoans and strongly associated with Body Mass Index (BMI). When she was in Samoa last summer, she connected with a local physician, Dr. Ulai Tapa Fidow, senior registrar in OB-GYN at the national hospital, and will do her research in collaboration with his department and the hospital’s department of pediatrics.

In addition to a genetic profile of each baby in the study, her team will measure total body fat and where fat is deposited at birth and after four months, using a Dual X-Ray Absorptiometry (DXA) scanner. Other aspects of the study include maternal diet during pregnancy and the duration of breastfeeding. These last factors are especially significant because they can be modified by health interventions.

“We want to know if a mother’s diet, possession of the gene variant, and/or the interaction between the two are associated with total or regional fat deposition in the infant. Fat deposition is an important outcome variable because having greater visceral fat storage (as compared to subcutaneous fat) is a clinical risk factor for cardiovascular disease in adults.” Visceral fat is stored within the abdominal cavity, around important internal organs such as the liver, pancreas, and intestines. Subcutaneous fat lies directly under the skin and is not associated with health risks.

Arslanian first became interested in her topic when she learned about non-communicable diseases that are associated with what’s called the ‘nutritional transition’ — the shift in dietary consumption and energy expenditure that coincides with economic, demographic, and epidemiological changes. She and her other adviser, Claudia Valeggia, professor of Anthropology, have studied the prevalence of overweight and obesity in indigenous populations in Argentina, “which is similarly increasing, we believe, due to some of the same parallel consequences of globalization,” Arslanian says.

“The change in subsistence patterns from hunting and gathering lifestyles to agriculture and to industrialization have occurred rapidly on the evolutionary timescale and have left some aspects of our biology poorly designed to handle the amount and types of food in our environment,” she explains. “Morbidity associated with the nutritional transition can differ between populations. Some people may be more susceptible to diabetes; others, to heart disease. We hope to help explain why some of these discrepancies exist.”

She adds, “Pregnancy and early infancy are of interest to us because they may be critical periods during which the biology of an individual is shaped in a way that has long-lasting effects into adulthood. We want to understand how some modifiable factors like breastfeeding and maternal diet and their interactions with the genome may be associated with risk factors for cardiovascular disease and diabetes in adulthood. Elucidating the relationship between early life exposures and later risk for these diseases will give us a better foundation for designing interventions in the future.”

Born and raised in Chicago, Arslanian earned her B.S. in Evolutionary Anthropology from the University of Michigan. At Yale, when not engaged in research, one of her favorite things is volunteering as a Science Fair Mentor to a third grade class at King-Robinson Inter-District Magnet School. She met with the class at least once a week during the year and developed a project that tested how and why soap bubbles are created. She is also a Writing Fellow at the Yale Center for Teaching and Learning and a doorperson at GPSCY.