Studying Science, from the Elm City to the South Pole 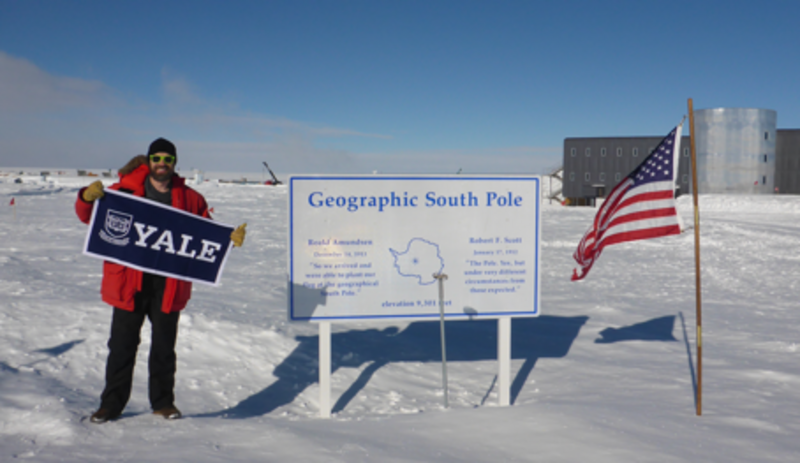 Most scientists will never have the opportunity to travel to the South Pole for their research, but then again, most scientists aren’t Faustin Carter (PhD ’15). Carter works as a postdoctoral researcher at Argonne National Laboratory in the High Energy Physics division. He is part of a group that specializes in building detectors for esoteric applications. The group’s primary focus over the last several years has been building and testing detectors for a massive upgrade to a telescope located at the geographic South Pole in Antarctica.

“We are one of several institutions that collaborate to manage, maintain, and operate the aptly named South Pole Telescope,” Carter noted. “Additionally, we are in the basic research stage on several other detector-related projects.”

The South Pole Telescope is the most advanced mm-wave telescope in the world (this is in contrast to an optical telescope or a radio telescope in that it only observes in the mm-wave region of the electromagnetic spectrum). Faustin and his team went down in the austral summer of 2017/2018 to upgrade the telescope with new detectors and lenses. The telescope has been around for about a decade, and this was the third major upgrade to the telescope's systems in that time. The primary aim of the upgrade was to increase the number of detectors on the camera by roughly a factor of ten. A consumer electronics analogue would be going from a 1 Megapixel camera to a 10 Megapixel camera.

“The upgrades we've made mean that we can take larger pictures faster and with more sensitivity than before. Effectively, what used to take several years to accomplish can be completed in one,” Faustin said.

The aim of the telescope is to measure the properties of the afterglow of the big bang. This is possible because light has a finite speed limit as it travels through the universe. This means that when scientists look at things that are far away, rather than seeing those objects as they are now, they see them as they were when the light that we are collecting was emitted.

“In effect, every telescope is actually a time machine that looks back into the past history of the universe. Our telescope takes this to the logical extreme and looks as far away as possible, focusing on light that has been traveling towards us since just a few hundred-thousand years after the big bang,” said Faustin. “This is the earliest observable light in the universe, and by measuring its properties with ever more precision we can learn a lot about the state of the universe during that epoch of time.”

By combining this information about the early universe with data about the present state of the universe from more local observations, scientists like Faustin can infer what sort of processes must have taken place over the intervening millennia, all in the hopes of trying to understand how the universe came to be the way it is.

“In my dissertation research, I focused on a specialized class of electronic devices known as “detectors”. These are devices that detect light. A ubiquitous example of a detector would be the CCD chip in the back of your cellphone camera that collects the light and turns it into an image on disk. Detectors are generally quite useful in physics research because they allow us to investigate the physics of any process that creates light; this covers quite a lot of physics and nearly all of astronomy!” said Faustin. “The types of detectors I built at Yale were much more special purpose and far more sensitive than a cell-phone CCD. They were designed to sense as little as one single photon (the smallest possible quantity of light) of ultra-violet light. Furthermore, they were designed to operate inside a very unforgiving environment: a vat of liquid helium cooled down to just a few hundredths of a degree above absolute zero. Conventional electronics are neither sensitive enough, nor hardy enough to handle this kind of task and so I built all my detectors using a special class of materials called superconductors. All of this effort was directed towards the application of trying to sense whether or not some of the helium atoms within the vat of ultra-cold liquid helium were emitting UV light, which would have been an indicator that they had recently interacted with some external ionizing radiation. We were ultimately successful and were the first group to build such a detector.”

Besides his studies, Faustin looks back fondly on the extracurriculars he was able to pursue while a graduate student at Yale.

“I served on the Graduate Student Assembly (GSA) for several years (two as vice chair), studied French, joined the Yale sailing club, played on a graduate hockey team as well as the GPSCY softball team, and bought and remodeled a foreclosed house in New Haven's Beaver Hills neighborhood. I'm not sure I'm supposed to admit to having had such a rich life outside of academia, but I did and it definitely made my time at Yale that much more memorable! 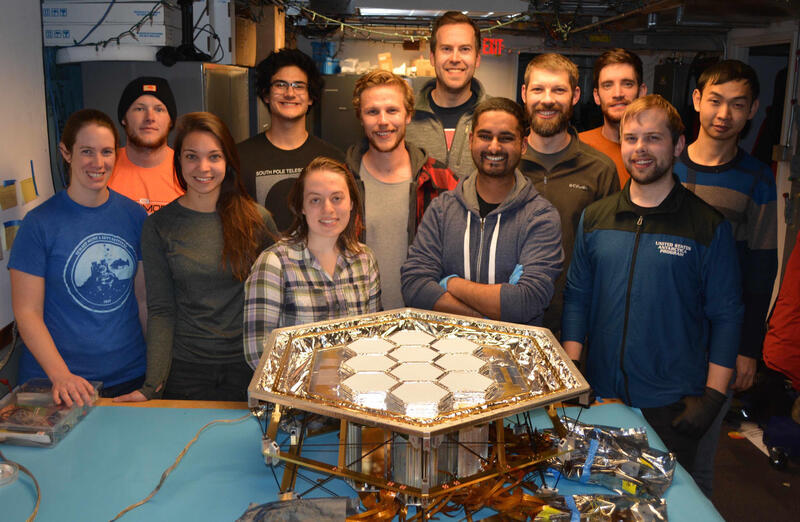