To signal the Graduate School’s deep commitment to effective and empathetic student guidance, Graduate Mentor Awards are awarded at Convocation.

Lauren Tilton (American Studies), chair of the Graduate Student Assembly, presented this year’s awards to Evan Morris, associate professor of Diagnostic Radiology, Psychiatry, and Biomedical Engineering; Kathryn Lofton, the Sarai Ribicoff Associate Professor of Religious Studies and American Studies; and Elisabeth Wood, professor of Political Science and International & Area Studies. Each had earned the deep admiration, affection, and respect of their students, whose gratitude was evident in the letters nominating them for the award. 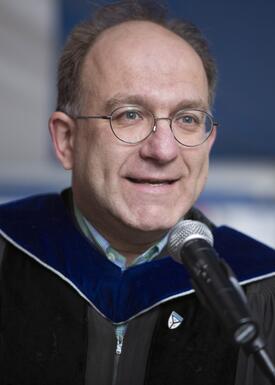 Morris has been working in the field of Positron Emission Tomography (PET) imaging for more than 20 years. He specializes in kinetic modeling of dynamic image data, using PET imaging of people and animals to understand and improve treatments for Parkinson’s disease, alcoholism, smoking, and drug abuse. He came to the Yale PET Center as co-director of the Imaging Section in the fall of 2009 after serving on the faculty of Indiana University, Purdue University at Indianapolis (IUPUI). He earned his BS from MIT and his PhD from Case Western Reserve.

In a letter nominating Morris for the award, one student wrote, “Evan is a great person, knowledgeable, patient, and willing to take as much time as necessary to teach,” and another said, “He is extremely accessible for questions and feedback on projects and willing to explain difficult concepts in an understandable manner.”

In his remarks at Convocation, Morris said, “It is truly heartwarming to be held in high regard by one’s students. The same day that I learned of this wonderful honor, I received a phone call from NIH… with 3.3 million bits of good news. But I am not exaggerating when I say that learning that I was to be recognized as a mentor was far more moving and more satisfying. … To me, there are three simple keys to successful mentoring: A. Always have great students; B. Treat them like colleagues; C. Demand a lot from them.” 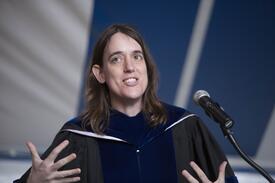 Lofton is a specialist in 19th and 20th century religion in the United States. Her first book, Oprah: The Gospel of an Icon (2011), uses the example of Oprah Winfrey to explore the nature of religion in modern America. She is co-editor (with Laurie Maffly-Kipp) of Women’s Work: An Anthology of African-American Women’s Historical Writings from Antebellum America to the Harlem Renaissance. Lofton joined the Yale faculty in 2009 after serving as an associate research scholar at the Center for the Study of Religion at Princeton University and teaching at Indiana University in Bloomington. A graduate of the University of Chicago, she holds MA and PhD degrees from the University of North Carolina (UNC) at Chapel Hill.

At Convocation, Lofton spoke about the challenges of connecting with students. “You will stand at the front of the room, sit at the table, or circumnavigate a lab only to find, time and again, that it isn’t happening.” However, when you connect, it “is nothing more, and nothing less, than total revolution. …Teaching is a relationship, and a relationship is a decision to be in a relationship, and both parties have to decide to do so or else there is no relationship. So you need to create a class like a suspension bridge, something that is flexible in multiple meteorology but is, finally, a conduit from one place to another.”

Lofton clearly knows how to build such bridges. Her students praised her, saying, “In the classroom as much as in informal conversation, Professor Lofton has been a model of intellectual rigor, generous wit, and genuine care.” Another wrote, “Kathryn Lofton is a remarkably generous, caring, and supportive mentor, encouraging her students in every way conceivable and in every element of the academic life,” and a third said, “Her energy is unflagging, her advice pragmatic and to-the-point, and her feedback incisive and engaged. She is intense in the best way possible, inspiring hard work, appreciation, and awe from those of us lucky enough to work with her.”

Wood joined the Yale faculty in 2004. She is a scholar of comparative politics with a focus on sexual violence during war, civil wars, collective action and social movements, transitions to democracy, and the politics of Latin America and Africa. She is the author of Forging Democracy from Below: Insurgent Transitions in South Africa and El Salvador (Cambridge University Press, 2000) and Insurgent Collective Action and Civil War in El Salvador (Cambridge University Press, 2003). She is also a member of the external faculty of the Santa Fe Institute. Before coming to Yale, she was on the faculty of NYU. After earning a BA in Physics from Cornell, a BA in Philosophy and Mathematics from Oxford, and MA degrees in Latin American Studies and Physics from the University of California, Berkeley, she went on to get her PhD in Political Science from Stanford.

Wood embodies the very essence of mentoring: “She treats you like a peer, not just a student,” one advisee wrote. Another said, “She is deeply committed to growth in her students, always seeking to provide additional opportunities and resources to help us succeed, putting timeless effort into commenting on papers and writing recommendation letters, and being truly interested in what we as students discover in our own research projects.” Other letters described Wood as “an engaging, energetic teacher who maintains high expectations of students.”

Professor Wood was not able to attend Convocation, but wrote, “Working with graduate colleagues at Yale – whether teaching, advising, or mentoring – rarely feels like work at all. One of the best aspects of an academic career is watching as students grapple with the classics as well as very recent works, begin to define their own interests, develop essay or dissertation topics, return from the field with wonderful ideas, data, and stories, and then carry out analysis on the cutting edge of social science. My ever-present impression is that I learn as much from them as they ever do from me.” 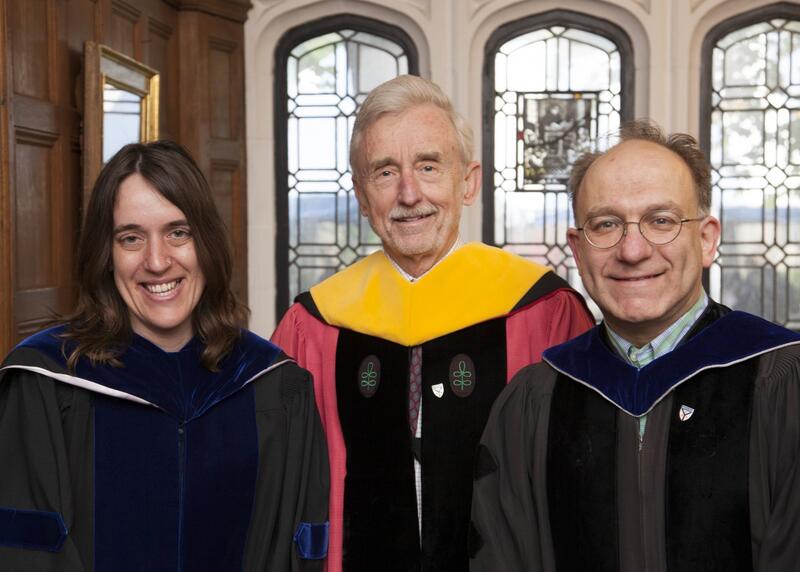