Tracing the History of the Universe

Distant galaxies show astronomers how the universe and our own galaxy evolved. 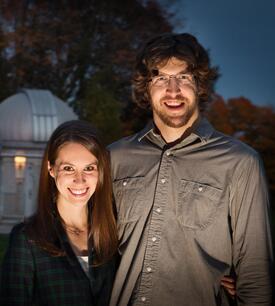 Astronomy students Erica Nelson and Joel Leja are members of a team that is teasing out the early history of the universe by looking at distant galaxies through the world’s most advanced telescopes. The galaxies they study are so remote that their light has traveled for billions of years before it reaches Earth, which means that Erica and Joel see the galaxies not as they are now, but as they were long ago.

The study of galaxy evolution is a very new field, Joel says. “It didn’t get started until 30-40 years ago. Even though it has ramped up exponentially in recent years, some of the most fundamental questions – like identifying exactly which galaxies from long ago turn into which galaxies today – remain challenging.”

Both Erica and Joel are part of an international team of researchers led by Pieter van Dokkum, chair of the Yale Astronomy Department. They have already made several important discoveries, including a new type of galaxy in the young universe.

Scientists have theorized that the heaviest galaxies developed from the inside out, forming their central cores first and expanding later, but no one had ever been able to observe this phenomenon until recently. Using an infrared camera on the high-powered NASA/ESA Hubble Space Telescope and a telescope from the W.M. Keck Observatory in Hawaii, a team led by Erica saw this process underway in a massive, newly discovered galaxy located 11 billion light years from Earth. They nicknamed it “Sparky,” because its highly dense core housed billions of stars in a relatively compact space. What they saw was what Sparky looked like 11 billion years ago, a mere three billion years after the Big Bang.

Back near the dawn of the universe, Sparky had about 300 billion stars, Erica says — twice as many stars as our home galaxy, the Milky Way, packed into a fraction of the space. Using archival, far-infrared images from NASA’s Spitzer Space Telescope and the ESA/NASA Herschel Space Observatory, the team found that Sparky was producing 300 new stars per year. By comparison, the Milky Way currently produces about one star a year.

This research was published recently in the journal Nature, with Erica as lead author.

Erica, Joel, and others on van Dokkum’s team are also figuring out the history of star formation in the Milky Way by studying about 400 other galaxies, selected from a sample of more than 100,000 galaxies observed by Hubble that span 11 billion years of cosmic history.

Joel’s contribution to the project is a technique to identify the progenitors of the Milky Way. He devised a novel method to compare galaxies as they changed over the years, “linking galaxy populations through cosmic time. It’s easy to identify what galaxies live in which cosmic epochs, but it’s much more difficult to trace individual galaxy populations through time. It’s analogous to how paleontologists try to piece together the fossil record by figuring out what prehistoric creature evolved into an animal that’s alive today. Our method to link galaxies through cosmic time relies on the assumption that the most massive galaxy in the early universe turned into the most massive galaxy today, the second most massive galaxy in the early universe turned into the second most massive galaxy today, and so on down the line. This method works because we think that bigger galaxies grow faster than smaller galaxies; big galaxies have more gravity, and will thus pull in more gas and stars than smaller galaxies.”

“By studying the Milky Way’s ancestors, we can see what our home galaxy would have looked like,” Erica says. Today, there are about 100 billion stars in the Milky Way, but that wasn’t always the case. “As we travel backward, we see stars winking out of existence. If you go back far enough, 11 billion years or so, the sky from Earth (if Earth had existed then) would look almost empty.”

They have found that at first the Milky Way, like other galaxies, had lots of gas but no stars. Gravitational forces compressed the gases, leading to the rapid birth of stars. At peak formation, about 9 billion years ago, it was generating approximately 15 stars a year. By the time Earth formed, 4.5 billion years ago, the Milky Way’s rate of star birth had slowed dramatically, to the rate of about three per year.

“For the first time we have images of what the Milky Way looked like in the past,” says van Dokkum. “By looking at hundreds of other distant but similar galaxies, we’ve traced dramatic changes in our own. We’ve captured most of the Milky Way’s evolution.”

For Erica, working on these projects “is a dream come true.” She first became interested in astronomy in the fifth grade, when she did a science project on the Hubble Space telescope. “I was blown away by the idea that by looking deep in space, it could look back in time. This concept – and data from a new camera on the Hubble Space telescope – are the foundation of my PhD thesis.”

Born and raised in Minneapolis, Minnesota, Erica went to Pomona College in Claremont, California, for her undergraduate degree. Nowadays, when not staring into a telescope, she likes backpacking in the Sierra Nevada, reading books (preferably on the beach in the summer), and exploring odd corners of New York City.

Joel, a native of Redding, California, earned his bachelor’s degree from the University of California, Berkeley. He entered college with plans to become a physician, but a freshman introductory course in astronomy changed his life.

“The course is legendary. It was taught by an astronomer named Alex Filippenko, who is a fantastic guy and an amazing teacher,” Joel says. “He studies supernovae and was one of the leaders on a team that won the Nobel Prize in physics in 2011 for discovering that the universe was expanding at an accelerated pace. After taking his course, I abandoned all my other plans and switched to astronomy.”

Outside of his academic pursuits, Joel tends bar at GPSCY once or twice a week and likes to backpack, rock climb, and run — when he can find the time.