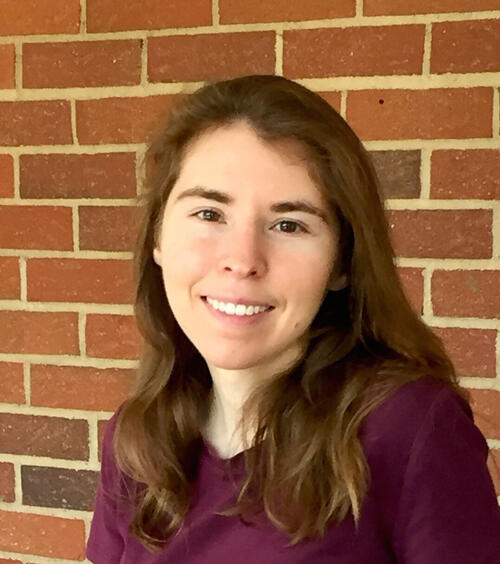 One minute she was riding along the highway with her family after wrapping up a successful first year as a graduate student in the Classics Department at Yale. The next minute, the car was rear-ended by a distracted driver, her seat belt snapped, and Cynthia (“Cara”) Polsley’s life changed forever. Lying by the side of the road waiting for an air ambulance to arrive, she couldn’t feel her legs and knew she had sustained terrible injuries. In fact, the impact had crushed her spine, broken her neck and most of her ribs. Her spinal cord had been severed across three levels of thoracic vertebrae, and she was paralyzed from the waist down.

Over the course of the next six hours, doctors rebuilt her spine with long metal rods that run like a ladder, up and down her back.

“The doctors said there was no chance of my walking again, if I survived the initial surgeries,” she recalls.

Her neck was stabilized with a brace. Her lungs had collapsed, and she was intubated. Once the respirator was removed, she needed therapy to regain the ability to take deep breaths. It took about a week to learn how to swallow again. Sitting up was even harder.

“The ability to sit up without help does not always return after a thoracic spinal cord injury (SCI),” Polsley says. “We were told by therapists that sometimes the abdominal muscles never come back after that type of injury. Without your legs to help stabilize you as you sit, it’s actually very difficult to sit up without extra support. Breathing is harder in some cases because the muscles below the injury site do not respond normally.” By leaning against the kitchen counter, she could stand with support, which “made all the difference for me in regaining enough muscle to sit up.”

That was back in 2013. Polsley spent six weeks in the hospital and a rehabilitation facility before going home to recuperate. At first, she says, “Coming home from rehab, I could barely lift three-pound weights and used a wheelchair. Now I easily lift several books at a time and walk with braces and a walker. There have been setbacks, the biggest one being a broken leg from SCI-induced osteoporosis over a year ago.” But she is walking again!

Her recovery so far has been virtually miraculous, and she hopes to get even better. “I aim to walk unaided and strive for as much recovery as possible. The goal right now is being able to walk without knee braces, but I look far beyond that. I am working to live more independently.”

In August 2014, a little over a year after the accident, Polsley returned to Yale to continue her PhD program.

“One thing that hasn’t changed is that I still love my research, teaching, and the people at Yale,” she says. “Yale has been extremely helpful. The entire Classics Department has been incredibly supportive from the beginning. I’d especially like to thank Irene Peirano-Garrison, Egbert Bakker, Victor Bers, and Pauline LeVen of Classics; Judy York of the Resource Office on Disabilities; and Michael Goulet of Yale Health for their unwavering support. There are many other people at Yale and outside who deserve thanks, including my family (parents above all) and many friends in both Kansas and Connecticut. I am beyond thankful for their help and encouragement.”

She has impressed many people with her “grit and passion toward making maximum recovery,” says York.

“Cara is one of the most positive and determined people I have ever met in my 30-plus years in health care. Her recovery is a tribute to her force of will,” Goulet adds.

Her dissertation adviser, Professor Bakker, has “the greatest admiration for Cara’s willpower and determination: she has progressed far beyond what seemed medically possible at the time of the accident, while at the same time having a stellar career as a graduate student at Yale.”

In November 2016, Polsley began producing a blog to “encourage others to think outside the box in pursuing recovery,” and to let fellow SCI-sufferers “know that they are not alone.” She also educates “those who have no familiarity with spinal cord injuries.” She plans to launch a non-profit organization that will continue the work promoted by her blog, drawing attention to the challenges of spinal trauma and promoting aid and research.

Before coming to Yale, Polsley earned an associate’s degree in English from Neosho County Community College in Ottawa, Kansas, then bachelor’s and master’s degrees in Classical Languages and Classical Antiquity from the University of Kansas.

Her dissertation analyzes “contrafactuals” — hypothetical “what if” scenarios — in ancient Greek narrative.

Associate Professor Peirano-Garrison calls the project “simply brilliant: Cara intends to weave together a study of a particular type of digression in Greek and Roman historians that engage with events that could have happened but did not: what if Alexander the Great had invaded Rome? – asked the Roman historian Livy. In Cara’s work, these alternative narratives are read for their potential to create suspense and exploit the role of fiction in a supposedly fact-driven genre like history. Her thesis, which brings together philology, pragmatics, socio-linguistics, and history, has the potential to make a significant impact in the study of Greco-Roman historiography. Cara is poised to become a leader in her field. She is assiduous in her work, generous to her fellow students and yet fierce in her enquiry, intellectually voracious, and adventurous in her methodology and approach.”

Living with the aftermath of a spinal cord injury hasn’t been easy, but Polsley’s healing goes on and so does her life. “It’s amazing to me how much time a spinal cord injury takes. It intrudes on most of the day,” she admits, but somehow she also manages to write the blog, work on her dissertation, do calligraphy, read science fiction, and spend time with friends and family.

Polsley has come far since that fateful day four years ago when she was thrown from a car. The road ahead will be challenging, but she is determined to live an active and fulfilling life and nothing will stop her.