Volunteering in New Haven on the Yale Day of Service

Many graduate students volunteered at local non-profit agencies on the Yale Day of Service, October 13. Organized by the McDougal Public Service Fellows, the event allowed participants to make new friends and have fun while helping to better the community. 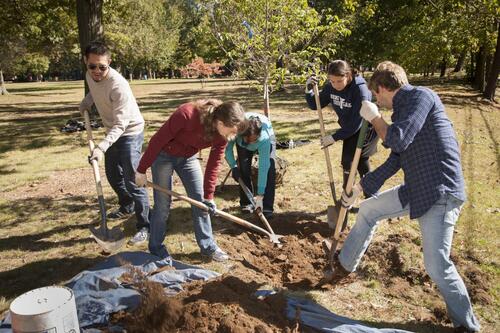 On a bright and beautiful Saturday in mid-October, 160 members of the Yale community came together to donate their time and talent to local non-profit organizations in New Haven. The 2012 Yale Day of Service (YDOS), organized by McDougal Public Service fellows Ted Schmid (Immunobiology) and Michelle Legaspi (Chemistry), “was vibrant with the energy and enthusiasm of the volunteers. It was great to see such a wide range of people from all over the Yale campus dedicated to public service,” says Michelle. “And for me, it was fantastic to be a part of organizing the Yale Day of Service, which is not only a platform for volunteers to band together and make a difference in New Haven, but also a day that facilitates continuous future involvement in the community.”

The event drew participants from among the faculty, staff, undergraduates, post-docs, and assorted friends and family members, but more than half of the volunteers were students of either the Graduate School (28 percent) or the professional schools (23 percent).

“This is our largest event of the year,” says Ted, who called it “a huge success!” 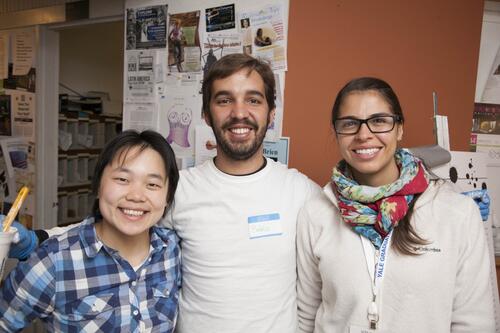 “I really think it is important for everyone at Yale to participate in at least one YDOS,” says first-year student volunteer William “Bill” Ruff (Immunobiology). “Being a part of the Yale community is a privilege that places each of us in the unique position to contribute to the greater good. For me, the YDOS offered insight into the opportunities that exist to give back to the community, and gave me the chance to make new friends while have a blast doing it.”

“The YDOS was a good way to learn about new possibilities for community service in New Haven. I would do it again and would recommend it to friends,” says Ian Bullock (Engineering & Applied Science). He regularly tutors children through New Haven Reads, but for the YDOS, he mowed a vacant lot to prepare it for planting, because he wanted to try something different, and “to be more involved in the community.”

Twenty four local non-profit agencies received help from teams of volunteers. At Columbus House, which serves people who are homeless or at risk of becoming homeless, students painted walls and partitions. At the Ronald McDonald House, a temporary “home away from home” for families of children who are being treated at nearby hospitals and healthcare facilities, volunteers spruced up the outdoor area and playhouse. Erector Square, a former industrial warehouse complex now used by many local artists, was made ready for the annual City-Wide Open Studios festival run by Artspace, an non-profit agency that connects artists, audiences, and resources. Some volunteers got down and dirty: gardening, raking, weeding, mulching, and planting at Edgerton Park, Edgewood Park, New Haven Farms, and around the city with the Urban Resources Initiative. At the Eli Whitney Museum and Workshop, which not only preserves the site on which Whitney constructed the first American factory in 1798 but also runs programs to encourage invention and experimentation, volunteers assembled project kits that will be used for hands-on education by schoolchildren. Other sites to benefit from YDOS ranged from the YMCA to Yale's Peabody Museum of Natural History, from the Creative Arts Workshop to the Beulah Heights Social Integration Program. 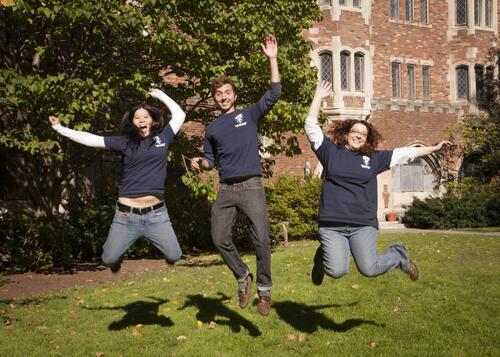 Bill chose to volunteer at Common Ground, “a multi-faceted center serving as a high school, urban farm, and environmental education center, all at the base of West Rock Ridge. I thought to myself, this is the place that I’ve been looking for.”

His group helped prepare the garden for winter, “which involved the final harvest of peppers, green beans, pumpkins, and even a few watermelons,” he says. “Clearing out the garden rows and light tilling of the soil followed the harvest. The entire time, we were asking questions and being educated as to why this prep was important for next year’s harvest.”

They fed the egg-laying hens and interacted with the farm's turkeys, goats, and sheep. Bill was surprised to see “the variety of chickens, especially the ones that laid blue eggs. I had no idea chicken eggs came in blue. I was also pleasantly surprised by the enthusiasm of the high school students who spent the Saturday with us at the farm,” and impressed with the range of Common Ground's activities, which include giving guided hikes, cooking classes, and overnight camping.

“I’m looking forward to continuing to be a part of the YDOS and volunteering at Common Ground,” Bill adds. “It was a great chance to meet new friends, to learn about local community projects, and to have fun giving back to the community. I have already recommended to friends that we organize a day of service at Common Ground.”

“Many of the participants told us that they would like to start volunteering regularly at the site they attended – that’s exactly the kind of response that we love to hear!” adds Ted. “YDOS is an opportunity not only to engage in community outreach on one day, but also to connect students, faculty, and staff at Yale with some of the service organizations around New Haven. Through YDOS and other events, we aim to encourage ongoing community involvement and promote awareness of the many local volunteering opportunities that are available.”

For Michelle, “Public service plays a large role in helping me develop a sense of place in New Haven. I have seen the positive impact we can make as volunteers, and it is indescribably fulfilling.”

Ted adds, “Public service activities offer meaningful outlets to make a significant difference in the community. Plus they are great opportunities to unwind, meet new people, and regain perspective on your studies while benefiting others.”