From Watersheds to Urban Crime Reduction

“I have never been bored in sixteen years of work for the U.S. Forest Service,” says urban forester Morgan Grove (Yale BA 1987, MFS 1991, PhD 1996, Forestry and Environmental Studies). The term “urban forester” may sound like an oxymoron, but it’s not. 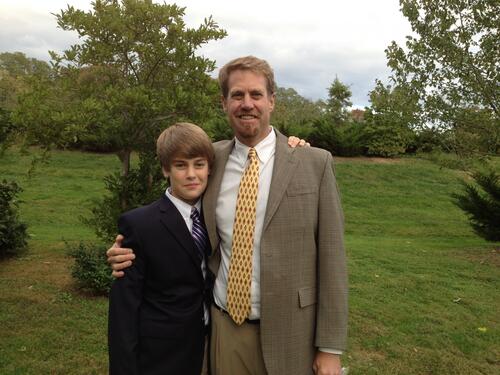 “I love to work in research, with decision makers, and the nexus between research and decision-making,” he says. “I am blessed that I am paid so well to do a job I love. I have always been interested in working in cities and in the better management of their natural resources. How can we revitalize cities socially, economically, and environmentally? It turns out I was interested in sustainability, but we did not call it sustainability back when I started in the field. We called it common sense.”

As an undergraduate, Grove had a double major in both Architecture and Studies in the Environment. He took courses at the School of Forestry and Environmental Studies (FES) and was drawn to “the topics, students, and professors. A lot of the students at the time were ex-Peace Corps volunteers. My parents had been in the Peace Corps, and I really liked the students’ spirit and attitude. I wanted to use my undergraduate degree to eventually become a landscape architect and thought I should know ecology before getting a master’s degree in landscape architecture.” He enrolled in FES and earned a Master of Forest Science in Community Forestry degree.

His PhD dissertation, “The Relationship between Patterns and Processes of Social Stratification and Vegetation of an Urban-Rural Watershed,” applied the approaches used at the Forest Service’s Hubbard Brook Experimental Forest in New Hampshire to an urban area. Hubbard Brook is a laboratory where scientists study the relationship between forests and water quality. Grove’s adviser was William Burch. “Burch has very strong ethical views of science, decision-making, and public service that were a very good fit for me. I owe him a great deal.”

As a graduate student, Grove played intramural soccer and softball and hung out at GPSCY. He played Santa at the FES winter holiday parties.

When it was time to launch his career, “the training I received from my adviser and his social network were essential assets.”

Recently, Grove’s work on the surprising link between urban trees and lower crime rates was published in the journal Landscape and Urban Planning and featured in an article by Richard Coniff in FES’s Yale Environment.

Despite urban folklore that treats all vegetation as a hiding place for criminals, Grove found that the right trees in the right place can play a significant role in preventing crime and make neighborhoods feel safer.

“The link between trees and crime has been something that has been argued about in the literature for some time,” he says. “We thought, well, we have all the data necessary: Let’s settle this.” In collaboration with another FES alumnus, Austin Troy (MF 1995), they studied the Baltimore, Maryland region. The study covers almost 700 square miles and is the most comprehensive investigation yet into the connection between trees and crime. Comparing neighborhoods with the same income level, housing stock, and population density, they found that the ones with more trees tended to have significantly lower crime rates. They don’t make the case that trees cause lower crime rates, but show that there’s a very strong correlation. Across the entire study area, neighborhoods with 10 percent more tree canopy cover experienced 11.8 percent less crime than their counterparts, after adjusting for socioeconomic and housing factors.

The study was highly data-driven, says Grove, for reasons that go beyond the science. Conventional wisdom suggests that trees can hide criminals. Grove and his co-author wanted to persuade a skeptical police force that trees actually discourage criminal activity, show urban planners that trees are a cost-effective way to stop crime, and convince residents of a crime-ridden neighborhood that planting and maintaining trees can make things better here and now. Public agencies rely heavily on data to set priorities and make funding decisions, so the only way to get multiple city agencies to cooperate with planting more trees, says Grove, is with “really good data.”