What Can Dogs Teach Us about Teaching?

Angie Johnston (Psychology) has been interested in how the mind works since she was a little girl doing studies with her chocolate Labrador, Ginger.

“I would try saying words she knew, like ‘treat,’ ‘sit,’ and ‘outside,’ in different tones of voice to see whether she really understood the words or was just listening to my intonation. According to my very informal studies, she definitely seemed more focused on the intonation than the words themselves,” Angie recalls. 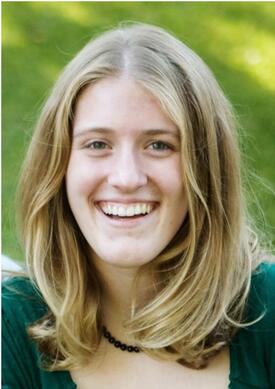 As the years passed, her interest in communication and learning grew more serious. A high school course inspired her, and as a college sophomore at the University of Texas, Dallas, she joined a developmental psychology lab and began to investigate the way children master critical thinking. That summer she did an internship at Yale in the Cognition and Development Lab with Frank Keil, the Charles C. & Dorothea S. Dilley Professor of Psychology and Linguistics, who is now her primary adviser. That experience sealed the deal, and she knew she would pursue higher education in psychology.

When Angie interviewed at Yale for Graduate School, Associate Professor Laurie Santos suggested she consider investigating canine cognition as part of her work on how children evaluate information. Research had already determined that even very young children expect that an adult who is trying to teach them something will provide enough information to enable them to perform the new task and only give information that is reliable and relevant to the challenge at hand.

“Usually, these expectations are useful for learning things that might otherwise be difficult to figure out on one’s own, e.g., how to use a computer, how to bake a cake, etc.,” Angie says. “However, in some situations these expectations can lead people astray and push them toward the wrong conclusion — such as when someone is lying or leaving out important information.”

One of Angie’s projects involves trying to find out if dogs have the same expectations as children. She works in Yale’s Canine Cognition Center, which opened its doors in December, challenging dogs with puzzle boxes that contain hidden treats. 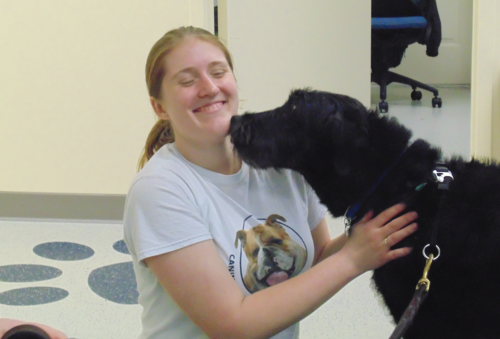 Some dogs are allowed to find the hidden food on their own. Other dogs are given hints about how to solve the problem, but sometimes the hints are slightly misleading. In one version of the study, dogs are presented with a box that has food hidden in four places, but are only shown that there is one treat for them to find. “The question, then, is whether dogs expect that the information provided by the human demonstrator will be helpful” in the same way children do. If so, “we would expect them to have a more difficult time solving the task when the human demonstration was misleading than when they work on the task entirely on their own.

“Dogs allow us the opportunity to understand more about how these expectations evolved in humans,” Angie says. “Through the process of domestication, dogs have become sensitive to the same communicative cues as human children — eye gaze, pointing, etc.— allowing for a unique opportunity to compare across species using the same methodology. Understanding which expectations come online automatically can shed light on the evolutionary backstory of children’s expectations about these cues.”

Working in the Canine Cognition center has been “an incredible experience,” Angie says. People from all around the New Haven area bring their dogs to the center, and in exchange for their participation, learn more about their dog and about canine cognition in general.

“We work with dogs of all ages, breeds, and sizes, and over time we hope to really get to know some of the dogs as they come back for multiple studies. One of the most striking things about working with the dogs has been the enormous differences between them. Some come in and solve the puzzle right away or persist until they finish the task, while others are much more cued into their guardian’s feedback and look to their human for help to solve the task.”

To help the dogs feel safe and secure, their guardians stay with them at all times. “The dog is always free to go back to its guardian or sniff around in the room anywhere they want. One thing we’re actually interested in is how often they look back at their guardian for help. This is one thing we know distinguishes dogs from wolves — when wolves get frustrated by a problem, they just keep trying to solve it until they succeed or give up,” but dogs will appeal to their human for help and encouragement.

On a typical day, Angie arrives about a half hour before the first animal subject comes in, to set up for the study.

“When the dog arrives, we say hello and give a brief tour of the center to remind her that this is a fun place, where there are games and treats.” After a five-minute warm-upto make sure the dog is in the mood to participate, Angie brings out the puzzle, which has four boxes that each contains a treat.

“In the first trial, I either demonstrate how to open one of the boxes (while the guardian closes his or her eyes) or just vaguely look at it to get the dog interested. Then I leave the room so I have no chance of influencing the dog’s behavior and watch the study unfold on our TV screen in the waiting room.”

Some dogs use their nose to try to solve the puzzle. Others use their paw, imitating Angie’s use of her hand. After two minutes, she returns to the room, replenishes the treats, and demonstrates how to open all four boxes. She goes back to the waiting room for another two minutes and records which of the boxes they open and whether or not they use their paws.

“Everyone in the waiting room, watching the study live on TV, gets excited when a dog solves part of the puzzle and does a silent cheer. It’s really incredible to be able to watch each dog’s strategies and see how their strategies are influenced by my short demonstration. A lot of times in psychology research, it’s hard to know what is going to happen with a study until it’s complete and all of the results are analyzed, but with the dogs, I’m able to directly witness how my demonstration influences their behavior in real time.”

Angie “can’t imagine anything more rewarding than being able to continue research for decades to come, while also getting to teach and mentor students who are interested in pursuing psychology research.”

On a more personal note, Angie and Mark Sheskin (Ph.D. 2013, Psychology) were married on May 10. Their professional interests overlap, enabling them to collaborate on science journalism research, but most of Mark’s work is focused on moral psychology. He is currently a postdoctoral fellow at Ecole Normale Superieure in Paris. In the summer of 2015, when he returns from France, they plan to get a dog of their own.