Celia Paris (Political Science) studies how Americans make sense of the political world and situate themselves in it through the beliefs they hold, the parties or groups they identify with, and the decision-makers they trust. 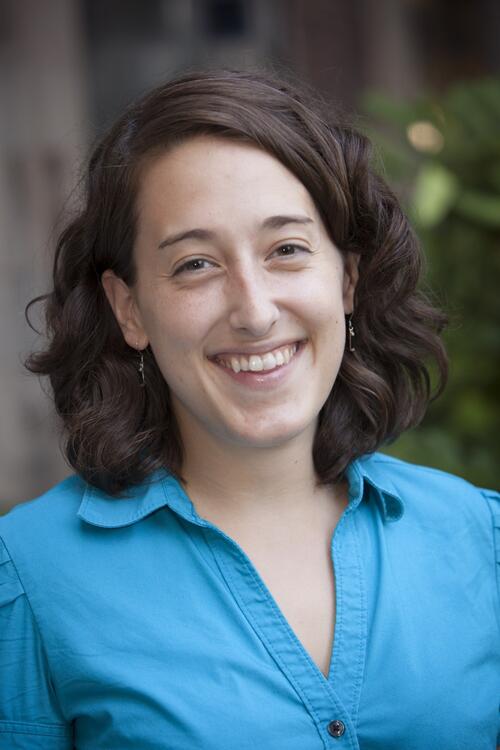 She presented some of her initial findings at a joint meeting of Yale’s Center for the Study of American Politics and the American Politics and Public Policy Workshop, with a paper titled “Can’t They All Just Get Along? Citizen Reactions to Political Disagreement Among Elected Officials.” Her dissertation is advised by Gregory Huber.

“We tend to think that all this partisan disagreement really bothers citizens – hence the record low approval ratings of Congress,” she says. “But I’m not sure we know what is actually driving that frustration. Is it the incivility and the negative tone of debate? Is it the perception that Congress just isn’t able to get things done? Or is it actually the fact that legislators increasingly work and vote only with members of their own party?”

In order to identify what affects citizens’ views of Congress as a whole and their evaluations of individual representatives, she conducts online survey experiments which include randomly assigned words, phrases, or images. A classic example of this approach involves randomly changing the race or gender of program recipients when asking respondents about whether they want to increase or decrease funding for a program: this allows researchers to identify how attributes of the target group affect support for the program.

In Celia’s experiment, respondents are asked to read a brief description of a Congressional debate in which levels of civility, legislative accomplishment, and partisan voting patterns are all randomly assigned. After reading this description – which is formatted like a news article – respondents answer questions about how much confidence they have in Congress and what they think motivated the individual representatives described in the story. Her pilot studies tested her questions using Amazon.com’s Mechanical Turk, an online marketplace; she then worked with the polling firm YouGov to administer the survey to a nationally representative sample. She is still in the process of analyzing the results, but she says that once she’s finished, she’ll “be able to say with greater clarity what standards citizens actually hold for their representatives, and how consistent they are in applying those standards. This will help us understand not only how we got to the current state of public dissatisfaction with Congress, but also what kind of reforms might actually make a difference in people’s perceptions.”

After graduating from Swarthmore with a special major in philosophy and education, Celia worked at a nonprofit fundraising firm and did campaign work before coming to Yale.

“While I was on the campaign trail, I became really interested in how citizens think about politics, because a lot of what I was seeing in the media didn’t reflect what people were telling me at their doors and at campaign events,” she recalls. “News stories that were touted as major scandals or gaffes would only be mentioned by the most politically engaged volunteers. Most of the time, people were thinking about and asking questions about the big issues like foreign policy and health care, and trying to decide which candidate could make good decisions. Individual voters weren’t necessarily keeping track of every twist and turn of the campaign.”

Celia found campaign work to be “a fascinating and inspiring experience, but there’s a tremendous amount of travel and a lot of 70 to 80 hour weeks.” When she thought about a long-term career, she realized she wanted to “tease out what makes people tick politically. Graduate school in political science seemed like a natural fit. When I visited Yale, I was deeply impressed by the thoughtfulness of the faculty and by the sense of community among the graduate students,” she says.

Since coming, she has found a supportive and engaging group of colleagues at the Institution for Social and Policy Studies and the Yale Political Science Department. In addition, Celia has served as a fellow at the Yale Teaching Center, running workshops on effective teaching strategies, producing online content, and mentoring fellow graduate teachers. In those rare moments when she’s not working on her dissertation, she enjoys doing yoga, cooking with produce from her CSA farm share, and reading mystery novels (particular favorites include the Annie Seymour series by Karen Olson, which is set in New Haven, and the Dublin Murder Squad series by Tana French).