Yale scientists open up new world for biologics — inside the cell 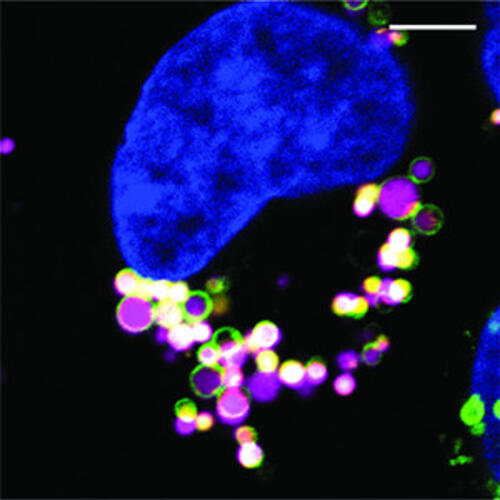 The vast majority of top-selling drugs are biologics — also known as proteins. Proteins are used today to treat many debilitating diseases, including arthritis, Crohn’s disease, and several forms of cancer. They have helped to improve the lives of many millions of people worldwide. And proteins have the potential to help many millions more, but they can’t, because most are unable to pass through the cell boundary to reach the regions of the cell where they are needed: the cell interior.

“It’s been known for decades that proteins can be internalized from the cell boundary into cellular compartments known as endosomes,” said Yale’s Alanna Schepartz, Sterling Professor of Chemistry and professor of molecular, cellular & developmental biology. “Getting these molecules out of endosomes and into the cell interior was the big problem.”

Schepartz and colleagues here at Yale now report the identity of a molecular key that effectively unlocks the endosome, allowing the selective passage into the cell interior of potentially life-saving protein drugs. This discovery was reported in the journal Proceedings of the National Academy of Science, USA.

Schepartz — working with graduate students Angela Steinauer, Jonathan LaRochelle, and Susan Knox, postdoctoral associate Rebecca Wissner, and undergraduate Samuel Berry — reports that the endosome unlocking key is the homotypic fusion and vacuole protein sorting (HOPS) complex — a multi-protein assembly that tethers certain endosomes together to allow them to fuse. When the HOPS complex is functional, protein therapeutics escape from endosomes. When it is not functional, they remain trapped within.

The discovery that protein therapeutics can hijack the HOPS complex to gain access to the cell interior should help scientists design therapeutic proteins to treat diseases that are not adequately treated using other approaches, Schepartz said.