New Haven has been called a “city of neighborhoods,” each with residential, shopping and recreation areas and distinctive histories. You can find housing options in neighborhoods that meet your needs, whether you want downtown excitement, leafy residential areas, or waterfront views, modern amenities, or historic charm. Many students live in one neighborhood, and use the parks, shops, cafes and bars in other New Haven neighborhoods regularly. Explore and enjoy your city!

Many Yale graduate and professional students who choose to live off-campus in the city of New Haven find attractive and affordable housing in the neighborhoods bordering or closest to the main Yale campus in downtown New Haven. The close-to-Yale neighborhoods include the following areas, with various names or nicknames listed, and are served by the Yale Shuttle:

Other great New Haven neighborhoods where graduate students live, dine, shop or get outdoors are listed below. Note that these areas generally are not served by the Yale Shuttle, but can be reached by CT Transit buses, bike lanes and zipcar.

Yale's West Campus is located in Orange and West Haven, Connecticut. The campus has plenty of parking and is served by regular Yale shuttle connections to the main Yale campus in New Haven and downtown. 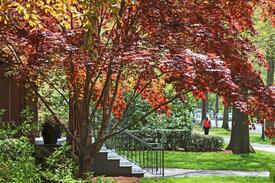